This temple dedicated to Lord Shiva is located along the southern bank of river Kaveri, in the city of Thanjavur, Tamil Nadu. It is one of the largest temples in South India, and an exemplary model of fully developed Tamil architecture. The temple is also known by the names Rajarajeswaram or Peruvudaiyār Kōvil. The temple is often referred to as ‘Dakshina Meru’ (Mount of South). 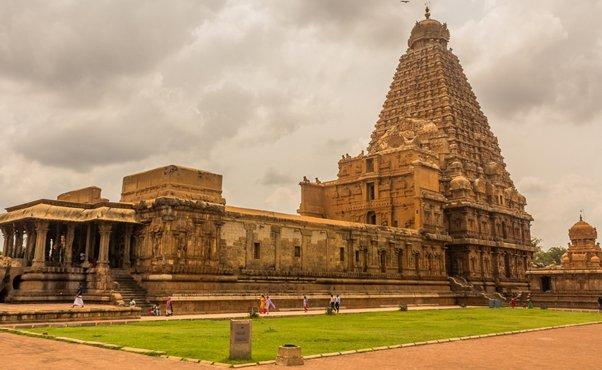 As per the historian, the temple was built around 1010 AD by Tamil king Rajaraja Chola I, a great king belonging to the Chola dynasty. This temple is one of the temples included in the “Great Living Chola Temples“. This list also includes temples like Gangaikonda Cholapuram and Airavatesvara, built during the times of the Chola dynasty. Both these temples are located in the vicinity of Brihadishvara Temple.

Rajaraja Chola, who commissioned the construction of this temple, was an ardent devotee of Lord Shiva. Therefore he named this temple ‘Rajarajeshwaram’, which literally means “the temple of the god of Rajaraja” – i.e. Lord Shiva.

Another inscription found later in the Brihannayaki shrine, referred to this temple’s deity as Periya Udaiya Nayanar, which appears to be the source of the modern names Brihadisvara and Peruvudaiyar Kovil. The word Brihadishwara is taken from Sanskrit, which can be broken down into Brihat + Ishwara. The word ‘brihat’ means ‘supreme’, and Ishwara’ means ‘god’. Hence the word means, ‘the supreme god’, a term used to refer to Lord Shiva.

With the passage of time, the temple suffered some damages due to natural reasons and attacks by several Muslim invaders. Some of the artworks are missing now. Efforts were made by several Hindu kings in the following centuries to restore the lost glory of the temple by constructing additional mandapam, monuments, and even adding new mural and shrines. This included shrines of Lord Murugan (Kartikeya), Amman (Goddess Parvati), and Nandi (Shiva’s mythological vehicle) were created around the 16-17th centuries. The Dakshinamurti shrine was built later. Fortified walls were created around the 16th century to protect the temple from invaders.

Architecture of the Brihadishvara Temple:

The original monuments of this temple were built around a moat. It included a gopuram (the entrance gate), the main temple, its massive tower, inscriptions, frescoes, and sculptures. Though these sculptures are mainly dedicated to ‘Shaivism’ (tradition of worshipping Lord Shiva), it also includes sculptures related to ‘Vaishnavism’ and ‘Shaktism’ traditions of the Hindu religion.

The Brihadeshvara temple’s plan and development utilizes the rules of axial and symmetrical geometry. It follows the Perunkoil (also called Madakkoil) art, which involves building a huge temple on a higher platform of natural or man-made mounds.
The temple compound has 5 main sections – the sanctum with a huge tower (Sri vimana), the Nandi hall (Nandi-mandapam), the main community hall (mukha-mandapam), the big gathering hall (maha-mandapam), and the pavilion that connects the great hall with the sanctum (ardhamandapam). The temple complex comprises a large covered veranda having several pillars. This veranda has a perimeter of 450 m and is used for doing parikrama, around the deity. The tower above the main sanctum is very high, in fact, the tallest among all temples built in South India 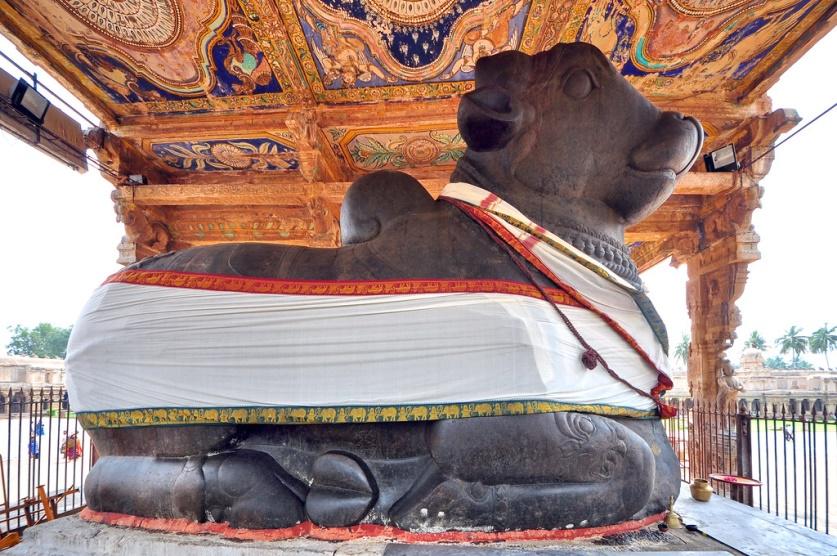 After the 11th century, additional mandapas were constructed in its northeast corner. Extra gopurams (gateways) were constructed to allow people to enter and leave from multiple gates. Before the start of the colonial era, some more shrines and structures were added by the Pandya, Nayaka, Vijayanagara, and Maratha rulers. However, these rulers were careful not to disturb the original plans and symmetry rules. In addition to the main sanctum, and Nandi-mandapam, the temple also houses separate shrines for Lord Kartikeya and Goddess Parvati.

Initially, the temple was built with a moat around it, which has been filled now. A fortified wall runs around this moat now. The two walls have beautifully decorated gateways, called gopurams. The main entrance to the temple is on the east side. The first gopuram is a 30 m high gateway, called the Keralantakan tiruvasal, (meaning the sacred gate of the Keralantakan, which was the surname of king Rajaraja). Just 100 meters, there is another gopuram called the Rajarajan tiruvasal. The inner gopuram is more decorated than the outer one and depicts scenes from the Puranas and other Hindu texts. This gopuram leads to a vast courtyard, where all shrines are all signed to east-west and north-west cardinal directions.

The sanctum is at the center of the western square, inside which the main deity is housed, in the form of a huge stone linga. It is called Karuvarai, (Tamil word, which means womb chamber, which in northern parts of India is called garbha griha). No one other than priests can enter this innermost chamber.

The Brihadishvara temple at Thanjavur organizes a dance festival, annually. Organized around Shivratri in the month of February of March, the dance festival attracts several local and regional dance groups, which perform all major classical Indian dance forms. This festival called, ‘Brahan Natyanjali Festival’ over 10 days.

Administration of the Brihadishvara Temple:

Currently, the temple is administered and managed by Babaji Bhonsle, who is the head of the Thanjavur Maratha royal family. He serves as the hereditary trustee of 88 Chola temples including the Brihadeeswara temple.

How to Reach Brihadeshwara Temple?

The best season to visit Thanjavur is the winters and the onset of summers. This is when the temperature is comfortable; the weather is pleasant and apt for sightseeing. Summers are very hot and humid. The best months to visit are from October to March.

Q. 2: Why is the Brihadishvara temple called dakshin meru?

Ans: Brihadishvara temple has a sanctum with a huge tower with a height of 200 m. Due to this, it is called dakshin meru.

Q. 3: What is the meaning of Brihadishwara?

Ans: The word Brihadishwara is taken from Sanskrit, which can be broken down into Brihat + Ishwara. The word ‘brihat’ means ‘supreme’, and Ishwara’ means ‘god’. Hence the word means, ‘the supreme god’, a term used to refer to Lord Shiva.

Q. 4: Who built the Brihadishvara temple?

Ans: The temple was built by Tamil king Rajaraja Chola I, a great king belonging to the Chola dynasty.

Q. 5: What is the best time to visit Thanjavur?

Ans: The best months to visit Thanjavur are from October to March.