Lord Shiva is one of the most revered deities across the world. There are several temples, where Lord Shiva is worshipped, both in abstract form (as shivling) and in the idol form. In the Southern part of India, there are many huge temples dedicated to Lord Shiva. One such temple is the Virupaksha Temple at Hampi.

Location of the Virupaksha Temple

Virupaksha is a Kanada name which means ” The All Seeing One- Lord Shiva”.

The meaning of the word ‘Virupaksha’ (Virup + aksha) is ‘Diversely Eyed’ or ‘very differently eyed’ – the one with ‘phala aksha – the jnana chakshu, the supreme conciousness’ along with the regular two eyes.

Here the  word ‘Virup’ doesn’t mean ‘Form less ‘ but it means ‘Diversely or very different or manifold – it is a ‘Visesha Upamana’ or ‘special parable’.

-rupa – having a form

-arupa – not having a form or formless

-sarupa – having a good form

The history of this temple goes back as old as the 7th century. Hampi was the capital city under the rule of the Vijayanagara Empire. But, the Virupaksha-Pampa sanctuary existed even before this. There are inscriptions, referring to Lord Shiva, which dates back to the 9th and 10th centuries.

One of the most famous kings of this dynasty, Krishnadevaraya was a major patron of this temple. He is the one who is believed to have ordered the construction of the central pillared hall and the eastern gopura. As per inscriptions, the pillared hall was constructed to celebrate his accession. In the later years, some additions were made to the temple during the Chalukya and Hoysala periods.

Around the 16th century, Muslim invaders attacked Hampi and destroyed most of the wonderful decorative structures and creations here. However, the religious sect of Virupaksha-Pampa remained intact and their worship has persisted throughout these years.
The beginning of the 19th century saw some major renovations and additions in the
Temple. These included ceiling paintings and the towers of the north and east gopuram.

Virupaksha Temple is among the oldest temple in India and the focal point of pilgrimage at Hampi. This temple is believed to be functioning without any interruption since it was built in the 7th Century. The temple is considered to be the most sacred sanctuary over the centuries. The temple is dedicated to Virupaksha, also known as Pampapati (meaning husband of Pampa), who is actually a form of Lord Shiva. His consort is believed to be a local goddess called Pampadevi, who is associated with the Tungabhadra River.

The Virupaksha temple consists of the ‘garbha-gruha’ (the main sanctum), three ante chambers, a pillared hall and an open pillared hall. The pillars have delicate carvings all over. There are several courtyards, a pillared monastery, some small shrines; and entranceways surrounding the temple.

There are several gopurams (gateways) surrounding the temple. The eastern gopuram is the greatest among all. It has 9-tiers and a height of 50 meters. This well-proportioned structure made of bricks and a gravel stone dominates Hampi’s skylines. It provides access to the outer court, which contains many sub-shrines.

Once you get inside, you can see the inner eastern gopurams, which is 3-tiered. Then there is ‘Kankagiri gopura’, which is located in the north. This gopuram leads you to a small enclosure, where there are some more sub-shrines. Going further, it leads to the river Tungabhadra. There is a small channel of this river, which flows along the terrace into the temple kitchen and moves out through the outer court.

One of the highlights of the temple is the use of geometry and other mathematical concepts in building and decorating this temple. The repeated patterns demonstrate the concept of Fractals, while on triangular temple top, one can see the patterns divide and repeat themselves, just like in a snowflake or some other natural wonders.

There are several mandapams surrounding the main temple but are in dilapidated condition. In ancient times, there was a shopping centre. That too stands in a ruined condition now. 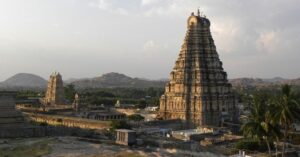 Jas soon as you enter the temple, on your left an unusual sight of the three-headed statue of the Nandi (the sacred mount of Lord Shiva). On the wall behind this, a large map of Hampi is painted, where all major attractions of Hampi are marked.

Moving east towards the second tower you would see the shoe safekeeping stall, souvenir stall, and ticket counter, where you can buy the entry ticket (Rs. 5), camera ticket (Rs. 50) and pay the video camera fee (Rs. 500)
Inside the court, you would come across a naughty elephant. If you hold a one rupee coin in your hand, the elephant will pick that coin using his trunk, and give a smooch on your head, which is treated as a blessing.

The most striking feature of this court is the ‘Ranga Mandapa’, the central pillared hall built in 1510 AD by Krishadeva Raya. Two mythical lion-like creatures are installed at the entrance of this elevated open pavilion.

Further west, beyond a small inner hall, is the ‘garbha-gruha’, which houses the ‘main lingum’ depicting Lord Virupaksha. At the entrance to this sanctum, there are statues of 8 feet tall guardian deities. There is a corridor surrounding the sanctum, which is used for ‘pradakshina’

Towards the north of this sanctum, are two of the main sub-shrines, which house the idols of Goddess Pampa and Bhuvaneswari, believed to be consorts of Lord Shiva. Behind the temple, there are steps, which lead to the rear exit of the temple.

The biggest festival at Virupaksha temple is the celebration of betrothal and marriage festivities of Virupaksha and Pampa. This is the largest religious festival here and attracts a huge crowd every year. The idols of the divine couple (Hindu God Shiva and Parvathi), are kept in the huge temple chariot which is made of wood and is taken along the main streets of Hampi. This ‘rath-yatra’ is conducted in December every year.

Other major festivals celebrated here are Diwali and Shivaratri, the latter being the festival to celebrate the birth of Lord Shiva.

Important Points About the Temple

The temple opens its doors for the public just before Sunrise and the doors are closed after the sunset. In between also, doors are closed for few hours around noon.
The morning and evening times are the best times to witness the daily temple rituals and ceremonies in the mornings and evenings.

In terms of months, October to February is the best time, as the overall weather is pleasant and evenings become mildly cold, which adds to the excitement. If you have an eye for natural beauty, you can click some great backdrops to the crumbling structures, and, take home a lot of memories with you

How to Reach Virupaksha Temple?

The closest international airport from Hampi is Hubli, at a distance of about 165 km from the temple. Tourists can easily hire a cab from Bellary to Hampi. Belgaum Airport is another option, which is about 270 km away.

The nearest railway station is Hospet, which is about 13 km away. Hospet is reasonably well- connected to the major cities of Karnataka. You can hire a cab or auto from the station to reach the temple.

Karnataka has a good road network. There are Volvo and other AC buses managed by KSRTC and other private operators. Cab service is also available. The nearest cities are Hospet (10 km), Kampli (18 km), Bellary (53 km), Hubli (140 km), Belgaum (260 km), and Bengaluru (288 km) among others.

FAQs about Virupaksha temple at Hampi

Q.1. What is the most unique thing about the Virupaksha temple at Hampi?

Ans. Virupaksha Temple is among the oldest temple in India and is believed to be functioning without any interruption since it was built in the 7th Century.

Ans. Lakkan Dandesha, who was a chieftain under the rule of Prauda Deva Raya, a ruler from the Vijayanagara dynasty.

Ans. Virupaksha is actually a form of Lord Shiva.

Q.4. Which is the highest gopura in Virupaksha temple?

Ans. The eastern gopuram is the greatest among all. It has 9-tiers and a height of 50 meters.

Q.5. Who built the cental pillared hall at Virupaksha temple?

Ans. Called ‘Ranga Mandapa’, the central pillared hall was built by Krishnadevaraya, the greatest king of the Vijayanagara dynasty.