If you ask someone about the biggest and the most popular Jain temple in Delhi, the answer you would get is Shri Digambar Jain Lal Mandir. Also known as ‘Lal Mandir’, the temple is dedicated to the 23rd Jain Tirthankar, Lord Parashvanath. It is called ‘Lal Mandir’ since red sandstone has been used in its construction.

The temple is located at the junction of Chandni Chowk and Netaji Subhash Marg, just opposite Red Fort. It can easily be seen from the road junction.

The city of old Delhi, commonly known as the ‘walled city’ was founded by the Mughal Emperor, Shah Jahan. The city was planned in such a way that around his Imperial residence, the Lal Quila, there was the main street, called Chandni Chowk. Shah Jahan invited many Agrawal and Jain merchants to settle in this city and establish their businesses. He even granted them some land, south of the Chandni Chowk, around Dariba Gali. The Lal Mandir was constructed during his reign only.

According to a famous Jain scholar Balbhadra Jain’s compendium of Digambar, there was a Jain officer in the Mughal army, who kept an idol of ‘Tirthankara’ in his tent for personal worship. With time, this tent started attracting other Jain army officers as well.

Subsequently, a Jain temple was constructed at the site in the year 1656. At that time, the temple was also known as “Urdu temple” (because it was located in an area called “Urdu Bazar”) and “Lashkari Mandir” (Lashkar in the Urdu language means an army camp). Three marble idols installed by Jivaraj Papriwal under the supervision of Bhattaraka Jinachandra in Samvat 1548 (1491 AD) were acquired by the Agrawal Jain community for the temple.

The present-day Digambar Jain Lal Mandir buildings were constructed after the fall of the Mughal Empire, during the second half of the 19th century, around 1878. Initially, the Mughals did not permit the construction of shikhar for the temple. The temple shikhar was only built in the year 1947 after India gained independence. 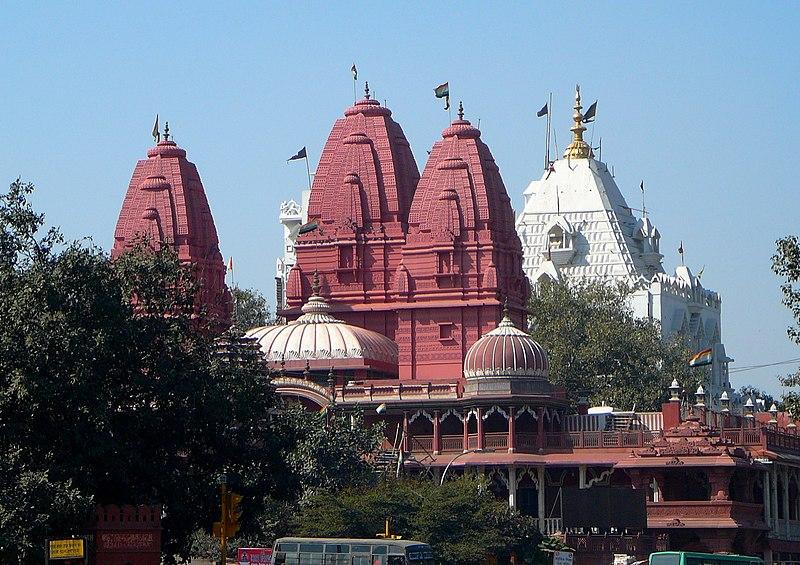 Legend Associated With the Lal Mandir:

Balbhadra Jain also narrates several legends about the Digambar Jain Lal Mandir. One such legend relates to Emperor Aurangzeb, who was Shah Jahan’s successor. Aurangzeb did not like any kind of music, so he ordered a ban on all musical instruments in the temple. However, miraculously, sounds of nagaadas (drums) would be heard emanating from the temple. Mughal officers were sent to inspect the temple, but they did not find anything. Aurangzeb himself visited the temple to see the miracle, and finally, lifted the ban.

While the temple has a highly resourceful library on Jainism, it is known for its charity hospital for birds, called Jain Birds Hospital. The avian veterinary hospital is in another building behind the main temple and is the only institute of its kind in the world. This hospital was started in 1930 and it treats about 15,000 birds a year. It provides shelter to a variety of birds especially the herbivores and squirrels rescued from accidents and bird hawkers. To ensure the safety of herbivore birds, vultures and other flesh-eating birds are treated as outpatients. 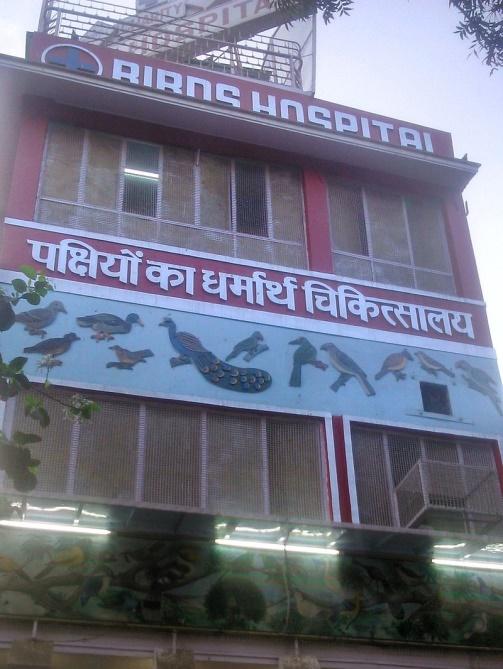 The pilgrims coming to the temple are welcomed by the Manastambha column at the temple entrance. On the first floor of the temple, after crossing a small courtyard, there is a primary hall of worship. There are 3 main shrines and several other sub-shrines in the temple.

In 1931, Acharya Shantisagar, the famous Digambar Jain Monk had visited the temple. Over a history of eight centuries, he was the first Digambara Jain Monk to have visited Delhi. To commemorate this historical visit, a memorial was built inside the temple.

The peaceful ambience attracts pilgrims in large numbers. The shining gilded paintwork under the lights of butter lamps and candles provides a soothing atmosphere for the devotees.

Who are the three main shrines dedicated to?

According to Jain cosmology, there is no temporal beginning or end of the universe. Furthermore, the wheel of time is divided into two halves- ascending time cycle, Utsarpini and the descending time cycle, Avasarpini (said to be the current cycle). Twenty Four Tirthankars grace each half of the cosmic time cycle and Jainism is found by the first Tirthankar each time.  Inside the Digambar Jain Lal Mandir, three main shrines are there and are dedicated to:

Two major schools of thoughts under Jainism are Digambara and Svetambara. While Digambara’s follow Mahavira’s five vows teachings, Svetambaras trace their practices and dress code to the teachings of Parshavanatha, who expounded four restraints for attaining Nirvana.

Adhering to the above vows provides spiritual peace, a better rebirth, or Nirvana (ultimate liberation), which are the ultimate human goals.

Best Time to Visit the Temple:

In terms of months, the best time to visit Delhi is during winters, when the temperature is comfortable. Though December and January are quite cold months. During the festivals, Paryushana, Samvatsari, Deepawali and Jnaan Panchami, the temple is beautifully decorated and it is advisable to visit during the same.

How to reach Lal Mandir?

Q, 1: What is the Shri Digambar Jan Mandir at Delhi commonly known as?
Ans: Lal Mandir

Q. 3: Why was the shikhar of the ‘Digambar Jain Lal Mandir’ temple built after 1947?
Ans: When the temple was built, the Mughal Emperors did not permit the construction of the temple-shikhar. It was built after 1947 after India gained Independence.

Q. 4: Who is the first Tirthankar of Jainism?
Ans: Rishabh Dev Ji, also known as Adinath