The Sun Temple Konark is one of the few temples dedicated to the sun god Surya. It is also a huge tourist attraction due to its architectural wonder and its significance. The most interesting thing about Hindu mythology is that everything present on this earth is believed to be a creation of God, and has an ‘ansh’ (part) of the god within it. This is why Hindus worship every element which affects our lives, like rivers, mountains, plants, animals, and planets. All planets are treated as gods and are worshipped. The Sun being the master of the solar system occupies a special place in Hindu mythology and is worshipped a lot.

Like all other planets, the Sun is also revered as a god and called ‘Surya dev’ (the sun god). There are several sun temples across the world and in India. Two prominent sun temples in India are Konark Sun Temple, at Konark (Odisha), and Modhera Sun Temple, Mehsana (Gujarat). These temples were built originally for prayers and sacrifices dedicated to Surya dev, the Sun god. Such temples were built across several countries like India, China, Egypt, Peru, and Japan. Most of these temples are in a ruined state now and some have been nominated by UNESCO as World Heritage Sites. One such temple, located in India, and nominated by UNESCO is the Konark Sun Temple, at Konark in the Indian state of Odisha. 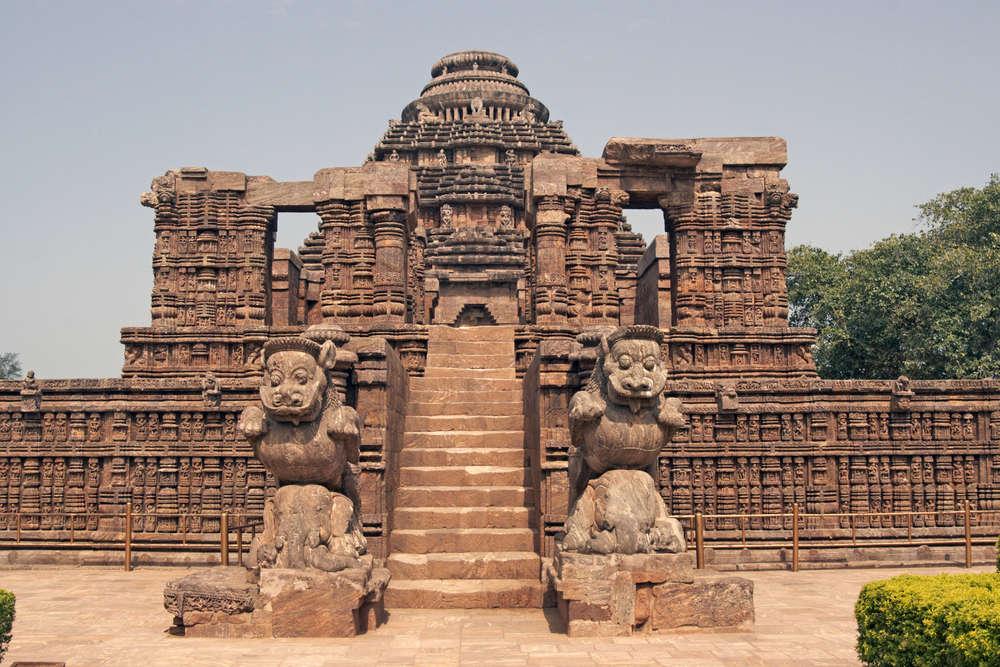 Location of the sun temple konark:

The Sun Temple is located in a village called Konark, along the coastline of the Bay of Bengal. The village got its names due to this temple only. Konark is located in Odisha, about 35 km northeast of Puri, another holy city of Odisha, and 65 km southeast of Bhubaneswar, the capital of Odisha. This temple was a major landmark for the European sailors, who gave it a name, the “Black Pagoda” as it looked like a great tiered tower that appeared black.

The Sun temple at Konark was built in the 13th century by the great king of the Eastern Ganga dynasty, Narasimhadeva –I. The temple was built around the year 1250 CE. This temple built in stone was designed in the form of a huge ornamented chariot dedicated to Suryadev, the Sun god.
Why did the king build this temple is not known. Historians believe that it could be due to his gratitude for a wish-fulfillment or to celebrate a victory or even out of his devotion to the sun lord. The royal touch is seen in the form of sculptures depicting royal activities, like hunting, processions, and marching of soldiers.

Significance of the temple:

As per Hindu mythology, Sun is depicted as a god, who starts his journey in the morning from the east and swiftly moves across the sky to the west, where it sets and completes the journey for that day, only to start a new journey, next morning.
The Sun Temple at Konark depicts this journey of the Sun-god across the sky in a chariot, marshalled by the charioteer Aruna (meaning dawn). The sun god is depicted as an attractive person standing in the chariot, which is being pulled by 7 horses, which are named after the seven meters of Sanskrit prosody – Gayatri, Brihati, Ushnih, Jagati, Trishtubha, Anushtubha, and Pankti. The sun god is depicted standing with a lotus in both his hands. He is shown flanked by two females on either side of his. These two females depict the two dawn goddesses, Usha and Pratyusha (both names mean the first light of the sun). These dawn goddesses are shown to be shooting arrows, which signify their shooting arrows of bright light to dispel the darkness. In a way, they also signify that each new day is a new beginning. It brings along new hopes and new energy.
The chariot is shown to have 12 pairs of wheels, which correspond to the 12 months of the Hindu calendar, with each month paired into two fortnightly cycles (called the krishna paksha and the shukla paksha). At Konark temple, this iconography of the sun is depicted on a grand scale. The temple has 24 giant and elaborately carved stone wheels which are nearly 12 feet (3.7 m) in diameter and are shown to be pulled by seven horses When seen at the time of sunrise, the chariot-shaped temple appears to emerge from the depths of the blue sea carrying the sun. 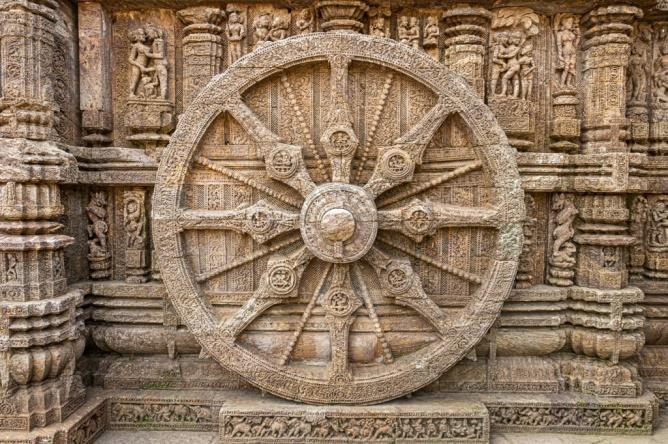 The Architecture at Konark:

The word ‘Konark’ is a combination of 2 Sanskrit words (kon + ark).  The word ‘kon’ means ‘angle’, and the word ‘ark’ refers to ‘Surya’ the sun god. Some believe that the work ‘kon’ is derived from its strategic position. There are 3 major temples in Odisha namely Jagannath Temple at Puri, Lingaraj Temple at Bhubaneswar, and the Sun temple at Konark. If you were to join these three temples over a map, they would form a bilateral triangle, with the Konark temple being one of the angular points. So, the name signifies that the main deity is the ‘sun’ god and the temple is built in an angular format. These three cities are said to be thee corners that form the Golden Triangle of Odisha.
The Sun temple follows the Kalinga style of architecture, which is derived from the nagara style of temple architecture. This ‘was among the 3 styles of Hindu temple architecture, which were prevalent in India at that time. These styles were divided in terms of their popularity across India. While the nagara style was popular in North India, it was the ‘dravida’ style that was popular in South India. In Central and East India, people preferred the vesara style. The difference between these 3 styles is how they do the ground plan and visually represent the elevation. The Kalinga style showcases the nagara style in its complete purity.
The Sun temple at Konark is a beautiful example of that. This style of temple architecture includes a temple in a square ground plan, with a sanctuary and assembly hall (mandapa). To give the temple an elevation, they build a huge ‘shikhar’ (curvilinear tower), which is inclined inwards and is capped. Though Odisha lies in the eastern region, but still the temple is built in the nagara style. This could be due to the fact that the kingdom included many areas of north India as well. Hence, this was the style they started working with. Once adopted, it became a tradition, with no change.

From glory to gloom:

The sun temple, which has once seen the days of glory, is now in ruins. Though the exact cause of its destruction is not known. Some people attribute it to some natural calamity, while people blame Muslim invaders for destroying the temple.
The main temple at Konark, called the deul, is no more there. In its hay days, the deul was surrounded by several subsidiary shrines, most of which depicted the many aspects of Surya. The ‘deul’ (sanctum, which houses the deity) was built at a height. The original temple consisted of the main sanctuary, called rekha deul, or bada deul (meaning big sanctum). In front of that, there was the bhadra deul (meaning small sanctum), also called jagamohana (where people could assemble and worship).  The attached platform called the pida deul consisted of a square mandapa with a roof like a pyramid.  All of these structures followed a square pattern with a variegated exterior. The central projection called the ‘raha’ was more pronounced than the side projections, called kanika-paga. This style allowed for a beautiful interplay of sunlight and shade and added to the visual appeal of the structure throughout the day.
The sanctum of the main temple is now damaged and stands without a roof and several original parts. On its east side is the Nata mandira (meaning dance temple). It is also built on a height and has intricate carvings. It stands on a high, intricately carved platform. According to texts, earlier there used to be an Aruna stambha (meaning Sun’s pillar) between the main temple and the Nata mandira, but during the troubled period, it was moved to the nearby Jagannath temple at Puri.
The upana (moulding) at the bottom of these platforms contains beautiful carvings depicting elements from life. These carvings depict musicians playing instruments, people carrying goods on their heads or on a bullock cart, travellers preparing a meal along the highway, hunting scenes, and even festivities.
Other walls contain images that depict the daily life of elite people. It shows young girls wringing their hair after taking a bath or applying makeup while looking into the mirror, or playing instruments such as the ‘veena’. It also has images of common people chasing away a monkey who is trying to snatch items, a family bidding goodbye to their grandmother who seems to be going for a pilgrimage, a mother blessing her son, a teacher teaching with students, yogi during a standing asana, and a warrior being greeted among others. The Konark temple is also known for its erotic sculptures showing couples in various stages of courtship and intimacy. These erotic sculptures are found on the temple’s ‘shikhara’ and illustrate the various poses described in the ‘Kamasutra’. 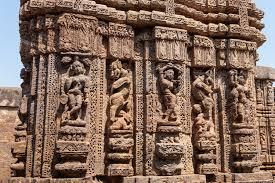 Since Konark is very close to the coast, the summers are very hot and humid. The months of April to June, are very hot. The best time to visit the Konark temple is between September to March, as the weather is pleasant during this time.
Also, if you are a photo enthusiast, and want to capture the rising sun or the setting sun, then it’s better to go early morning or early evening, and you can capture the temple in full glory, with the sun god in the background.

How to reach Konark?

The Konark Sun Temple is undoubtedly one of the greatest architectural marvels of the Indian subcontinent, as a symbol of rich architecture. Though it has lost much of its glory, it still attracts a lot of tourists. UNESCO has declared the Sun Temple at Konark as a World Heritage Site, which highlights its importance. This importance can be gauged from the fact that the state emblem of Odisha containing a warrior and horse statue has been taken from the Konark temple. The design of the new ten-rupee currency note depicts a motif of Konark Sun Temple on the backside.

Q. 1: Which is the oldest sun temple?
Ans: Sun Temple at Konark, Odisha

Q. 2: Who built the Sun Temple at Konark?
Ans: Narasimhadeva –I

Q. 3: How is sun god depicted in Konark Sun Temple?
Ans: In Konark Sun Temple, the sun god is depicted as an attractive person standing in the chariot, which is being pulled by 7 horses. He is seen holding with a lotus in both his hands, and is flanked by two dawn goddesses, Usha and Pratyusha, shooting arrows to dispel the darkness.

Q. 4: What name did European travelers gave to the Sun Temple?
Ans: The Black Pagoda