More commonly known as ‘Birla Mandir’, the Laxminarayan temple is one of the oldest Hindu temple and a major tourist attraction in Delhi. The temple is dedicated to Lord Laxminarayan and Mother Lakshmi, who is known as the goddess of wealth and prosperity.

The word Laxminarayan consists of two words, ‘Laxmi + Narayan’, which means husband of Lakshmi. Among the trinity of gods, Lord Vishnu, also called ‘Narayan’, is one of the three gods belonging to the ‘trinity of the gods’ and is believed to be the preserved of the universe.

The location of the temple: 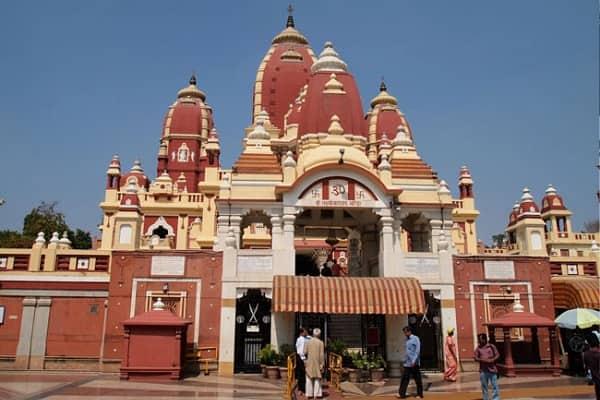 The history of the temple:

The temple by built by the famous industrialist and philanthropist father-son duo of Baldeo Das Birla and Jugal Kishore Birla, under the guidance of Pandit Vishwanath Shastri. They both belong to the well-known business family of India, ‘the Birlas’.

Since Delhi was ruled by Mughals and other Muslim rulers, there was not any notable temple in Delhi. This was because, like most Muslim rulers, even Mughals did not permit the construction of any grand temple. The Laxmi Narayan Temple was thus built to fill that void. Spread over 7.5 acres, this temple, was the first large Hindu temple that was built in Delhi.

The foundation stone for the temple was laid in the year 1933 by the Jat Maharaj Uday Bhanu Singh. The temple took 6 years to construct and was opened for the general public in the year 1939. The builders wanted the temple to be inaugurated by the father of the nation, ‘Mahatma Gandhi’. Gandhi, who believed in equality, laid a condition that the temple should be restricted to Hindus of only the so-called ‘upper castes’. He wanted the temple to be open to people of all caste and religions. The Birla family agreed to it, and then the inauguration was done by Gandhiji. Swami Keshavanandji performed the concluding ceremony and ‘yagna’.

Significance of the Laxminarayan Temple

Devotees visit the temple to seek blessings of Lord Vishnu (Narayan) and Maan Laxmi for health, wealth & prosperity since Lord Vishnu is the preserver while Goddess Lakshmi blesses the devotees with wealth and prosperity. Since the temple houses other shrines as well, people visit to seek the compassion of other deities as well.

The architecture & design of the temple:

Along with the idols of the main deities Lord Vishnu and Maan Lakshmi, the temple has several sub-shrines and includes idols of Lord Shiva, Lord Ganesha, Maan Durga, Lord Krishna, Gautam Buddha, and Lord Hanuman. In addition to these shrines, the temple complex has a famous hall, called Geeta Bhawan, for conducting discourses. The temple has gardens and fountains along with Hindu & Nationalistic sculptures adorn the temple complex. Since Birlas were involved in its construction, the temple came to be known as Birla Temple. This was the first temple built by Birlas, after which they built many more temples across India.

The architectural design for the temple was prepared by Sris Chandra Chatterjee, the proponent of the Modern Indian Architecture Movement. To a large extent, the architecture of the temple is influenced by the Swadeshi movement of the early 20th century. The canonical texts were also used. The temple construction made use of the use of modern materials, available at that time. The main architectural style used in constructing this three-story temple is the Nagara style of temple architecture. 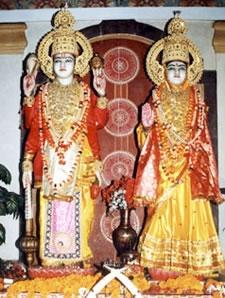 There are carvings all across the temple, which depict the scenes from ‘swarn-yug’ (golden age) of the Hindu religion and are taken from the various holy texts. Over a hundred skilled artisans from Banaras, under the guidance of Acharya Vishvanath Shastri, carved the icons of the temple. The fresco paintings depicting Shastri’s life and work adorn the shrine. Hindu symbols along with quotes from the Bhagavad Gita and The Upanishads fill the Temple walls.

While the temple faces east, it is situated on a high plinth. Above the sanctum sanctorum, the highest tower (shikhara) of the temple is about 160 feet high. In order to give a giant feel to the tower above the main sanctum, the towers of the adjoining shrines rise only up to 116 feet. While the idols of goddess Lakshmi and Lord Narayan are housed in the main temple, the side temples are dedicated to other deities.

The Geeta Bhawan to the north of the temple is dedicated to Lord Krishna and is adorned with Indian mythological paintings, which depict the scenes of the life of Lord Krishna and other deities.  The temple idols were carved out of marble stones brought from Jaipur. Premium Kota stone from Makarana, Agra, Kota and Jaisalmer was also used in the temple premises. The beauty of the temple is further enhanced by artificial landscaping and cascading waterfalls.

The temple celebrates two major festivals- Janmashtami, the birth of Lord Krishna and Diwali, the festival of lights. The entire temple complex is decked up for these auspicious occasions. People, from all walks of life, visit to participate in these festivals.

Things you can do, while at Birla Temple:

Best time to visit the temple:

How to reach Laxminarayan Temple?

The Timings at the temple:

The Birla Mandir at Delhi opens early morning at 4:30 am. The doors of the temples are closed for darshan, during the afternoon between 1:30 pm to 2:30 pm. After this, the devotees can have darshan from 2:30 pm till its closing time, which is 9:00 pm

Q. 2: Who inspired the construction of the Birla temple?
Ans: Pandit Vishwanath Shastri.

Q. 3: What is Laxminarayan Temple at Delhi, popularly known as?
Ans: Birla Mandir

Q.4: Which is the first Birla Temple in India?
Ans: Laxminarayan Temple at Delhi