Known as ‘the bleeding goddess’, Kamakhya Devi is worshipped by devotees the world over. The Kamakhya temple is considered the most powerful ‘Shakti Peeths’ among all the 51 shakti peeths situated at a different location in India.

It is one of the biggest and oldest temples of Goddess Kali.  The temple is famous for its annual Ambhubachi mela and also famous as the bleeding goddess. It is situated on the western portion of the Nilachal Hill, Guwahati, Assam.

The main temple of Goddess Kamakhya is surrounded by 10 Mahavidyas which are Bhuvaneshvari, Bagalamukhi, Chinnamasta, Tripura Sundari, Tara, Kali, Bhairavi, Dhumavati, Matangi and Kamala Temples. It is one of the Hindu temples where the sacrificial form of worship is performed to date; devote offer goats as an offering to their Goddess. Ambhubachi mela is one of the reasons for its popularity.

Significance of the Kamakhya Temple:

The Temple is a tribute to the source of creation of everything. It symbolizes sexuality, fertility, and the origin of life. It celebrates Goddess Sati’s want to persuade her husband Shiva, and lead a lifetime of connubial elation. This temple stays closed for 3 days during the menstruation cycle of the Devi Kamakhya.

The temple was constructed by the rulers of the Mlechcha dynasty in the 8th century but it is believed that it has been renovated many times by Koch king Nara Narayan and Ahom kings till the 17th century and it is located on the hill which is known as the Nilachala or Blue hill.

The architectural design is a combination of two completely different styles – the normal nagara or North Indian and Saracenic or Mughal. Hence, this has been treated as a separate style and given the name of Nilachala Style of Architecture.

The temple has four complex structures – the garbha-gruha (main sanctum) and three mandapas (calanta, pancaratna, and natamandira). The garbha-gruha has a Pancha Ratha plan that rests on plinth mouldings. There is no idol of Maa Kamakhya inside the garbha-gruha. Instead, it houses a rock fissure in the shape of a ‘yoni’ (female genital). There is a natural spring that moistens the stone all the time.

In addition, the temple has a structure like a beehive ‘shikhar’ with a beautiful image of Lord Ganesha and other Hindu god and goddess. The main temple has a small deity of Devi Kamakhya in the square shape chamber and the walls of this chamber contain sculpted images of Lord Naranarayan and other inscriptions and gods. There is a Bhogmandir (also called Pancha Ratna) with 5 domes as same in the appearance of the main temple; people perform dance, pooja and other festival activities. 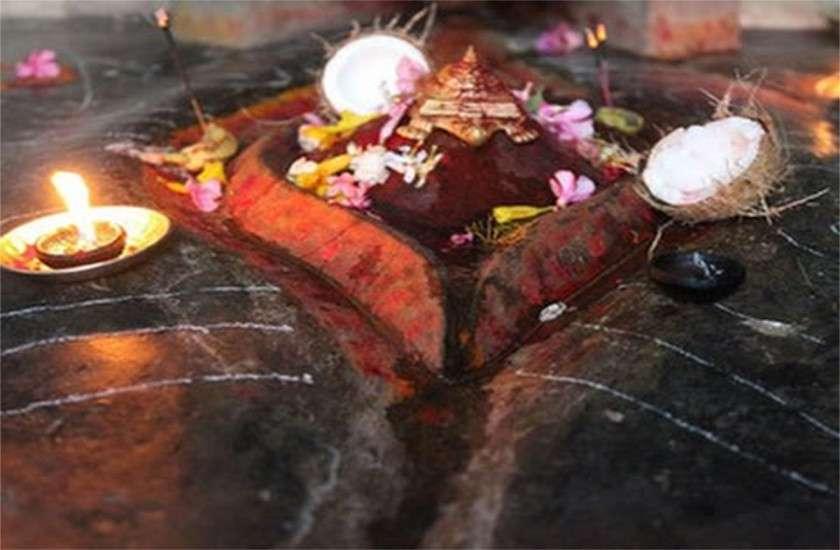 Legend Associated With the Temple:

As per mythology, Maa Kamakhya symbolizes the power of procreation that every woman has. It is believed that Sati’s yoni or ‘vagina’ and ‘womb’ fell on this area when Lord Vishnu disintegrated Sati’s body with his ‘Sudarshan Chakra’ to pacify the enraged Lord Shiva.

The two elements of the Goddess stand as a symbolisation of the power to create a new life that every woman possesses. Also, mythology says that this is the place where the goddess used to have her intimate encounters with Lord Shiva and that too signals the start of a new life.

According to another legend, Maa Sati married Lord Shiva against the wishes of her father. Once when her father was having a yagna, he did not invite them. Sati however still came to the yagna. Engraged at this, her father insulted Sati who could not bear the insults to herself and her husband, jumped into the fire and killed herself

When Lord Shiva came to know of his, he got so angry that he started his divine dance of destruction The Tandav. In order to save the universe , Lord Vishnu cut the body of Sati into pieces. The places where parts of her body fell became known as Shakti Peeths. The Kamakhya Temple is one place where Maa Sati’s Vagina fell and it gave rise to the legend of the Bleeding Kamakhya

Kamakhya Devi is famous as the bleeding Goddess. The mythical womb and vagina of Shakti are supposedly installed in the ‘Garvagriha’ or sanctum of the temple. In the month of Ashaad (June), the Goddess bleeds or menstruates. At this time, the Brahmaputra river near Kamakhya turns red. The temple then remains closed for 3 days, and holy water is distributed among the devotees of Kamakhya Devi.

Although there is no scientific proof of the bleeding , people say that the priests pour vermilion into the waters. However, symbolically, menstruation is the symbol of a woman’s creativity and power to give birth. So, the deity and temple of Kamakhya celebrate this ‘shakti’ or power within every woman.

It is believed that when the body of Sati was pierced into pieces by the ‘Sudarshan Chakra’ of Lord Vishnu,  parts of the body fell into different places each creating a ‘Shakti Peeth’ which are thought to be very sacred. Similarly, the vagina of Sati fell in Pragjyotishpur or Assam, giving rise to the Kamakhya Temple.

Festivals Celebrated At the Temple:

The main festival celebrated at Kamakhya temple is The Ambubachi Mela. This festival is also known as Ameti or Tantric fertility festival. This mela is celebrated every year in the month of June during the monsoon season. This is the celebration of the annual cycle of the menstruation course of the goddess Kamakhya. It is believed that Goddess Kamakhya, the Mother Shakti, undergoes her annual cycle of menstruation during this phase.

An additional belief is that in the monsoon rains, the artistic and nurturing power of Mother Earth’s ‘menstruation’ becomes accessible. On this occasion, the Brahmaputra River close to Kamakhya turns red. During this menstruation cycle, the temple is closed for devotees for three days and reopens on the fourth day. The belief is that, like other women, mother earth is ‘unclean’ during these days. Hence, there are restrictions on cooking, pooja, reading holy books, etc. On the fourth day, Devi Kamakhya is given a bath and pooja and rituals are performed to ensure her purity.

How to Reach Kamakhya Temple?

You must witness the most auspicious festival that is Ambhubachi, which is celebrated in the month of June annually for three to four days. This is a celebration of the menstruation course of goddess Kamakhya.

You can visit at any time because climatic conditions are good. This is because the Brahmaputra River is known to get over-flooded during rains.

Pooja and other rituals performed at the temple:

The day starts with the snana of pitha-sthana at 5:30 am. At 6:00 am there is Nitya pooja, after that at 8:00 am, the temple doors are opened for the public.

At 1:00 pm, the temple doors are closed, which opens again at 2:30 pm. The offerings to the goddess and distributed among devotees as ‘prasad’. The doors are closed for the day at 5:15 pm. The last aarti is performed at 7:30 pm.

The Kamakhya temple has an official website, where people can have darshan, offer aarti, and order online aarti and prasad. The website address is: www.maakamakhya.org

Q. 2: Why Kamakhya temple is famous?
Ans: The temple is a tribute to the source of creation of everything. It symbolizes sexuality, fertility, and the origin of life. It celebrates Goddess Sati’s want to persuade her husband Shiva, and lead a lifetime of connubial elation.

Q. 3: Whose idol is present in the garbha-gruha of the Kamakhya temple?
Ans: There is no idol of Maa Kamakhya inside the garbha-gruha. Instead, it houses a rock fissure in the shape of a ‘yoni’ (female genital). There is a natural spring that moistens the stone all the time.

Q. 4: Which goddess is known as ‘the bleeding goddess’?
Ans: Devi Kamakhya

Q. 5: Which is the biggest festival celebrated at Kamakhya temple?
Ans: Ambhubachi Mela, which is celebrated in the month of June.