The Sri Krishna Balrama Temple at Vrindavan, more popularly known as ISKCON Temple is the first temple constructed by the International Society for Krishna Consciousness (ISKCON). Today ISKCON has about 850 temples across the world, out of which over 150 temples are located within India.

Location of the temple:

The Sri Krishna Balrama Temple is located at Raman Reti in Vrindavan, District Mathura (Uttar Pradesh). The temple stands on the banks of Yamuna River, where Sri Krishna along with brother, Balrama and other friends used to herd their cows. Following the lines of all other temples made by ISKCON, Sri Krishna Balrama Mandir is also called Iskcon Temple.

History of the ISKCON Temple, Vrindavan:

The temple was built in the year 1975 by the ISKCON cult. This was the first ISKCON temple. The foundation stone for the temple was laid by Swami Prabhupada (founder of ISKCON) himself.

Since that time many more things have been added to the temple complex with the thought of converting it to be an international center of bhakti, as per the vision of Swami Prabhupada. 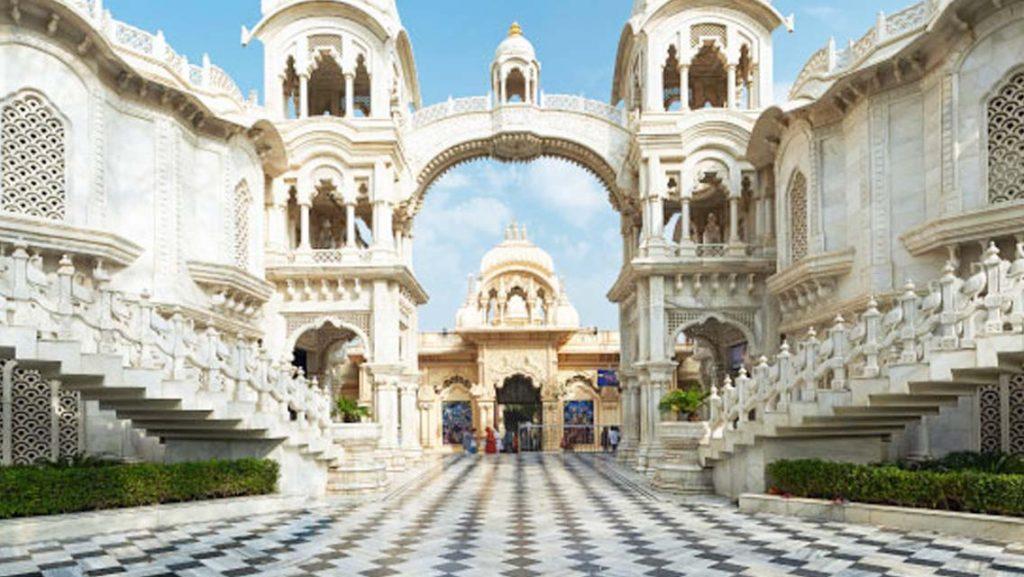 The International Society for Krishna Consciousness, commonly known as ISKCON is a movement, which was started by His Divine Grace A.C. Bhaktivedanta Swami Prabhupada. The organization was formed in the year 1966 in New York during his visit to the US. He wanted to spread the transcendental message of Sri Chaitanya Mahaprabhu, the Supreme Personality of Godhead, in the ‘kaliyug’ to the entire world, especially the Western World.

A part of the Bhakti movement, it was Swami Chaitanya Mahaprabhu, who along with his brother Nityananda Prabhu and six principal associates, started teaching and codifying the precepts and practices of ISKCON. Under his spiritual guidance, several hundreds of volumes on the philosophy of Krishna consciousness were compiled.

Commonly known as the “Hare-Krishna Movement’, ISKCON believes in the eternal teachings of the ‘Bhagavad-Gita’, which has been written more than 5000-years ago, and orally narrated since time immemorial. 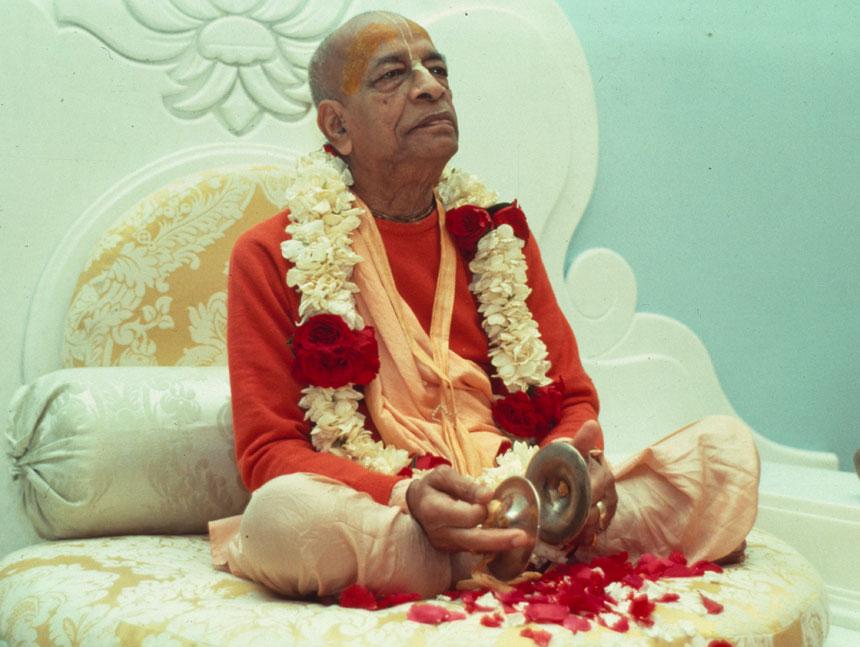 On orders from his guru, Swami Prabhupada left for the USA in 1965 at the age of 70. When he landed in New York, he had only Rs. 4 in his pocket. But his mission was very clear – to spread consciousness about Krishna among the English speaking people of the West. Instead of targeting the elite class, he tapped into the counter-cultural people by preaching and chanting in public parks. This was he was able to attract many hippies and the youth. His movement acquired the name “Hare Krishna Movement”.

A year later, Swami Prabhupada moved to San Francisco, where the movement got a lot of support. And when the movement reached England, it was able to gather financial support as well, from George Harrison from the Beatles’ rock group. That’s how ISKCON came into existence.

Harrison recorded several tracks with the ISKCON theme and even included the Mahamantra in one of his hit track “My Sweet Lord”.  In 1968, Swami Prabhupada laid the foundation of the first Hare Krishna commune in West Virginia, called “New Vrindavan”. Since then, it has established more than 800 centres all over the world and has millions of followers. And within only 11 years, ISKCON had devotees across all major countries of the world.

The devotees belonging to the ISKCON group follow a disciple line of Brahma Madhva Gaudiya Bhagavata Vaishnavas, which is the largest branch of Gaudiya Vaishnavism. The term ‘Vaishnavism’ means ‘worshipping Lord Vishnu’ and ‘Gauda’ refers to the place in West Bengal, where this particular branch of Vaishnavism originated.

This sect was started by the great saint Chaitanya Mahaprabhu, who believed in ecstatic ‘bhakti ‘(devotion). He started the practice of ‘Sankirtan’, which involves openly expressing devotion to Lord Krishna, through dance and song. This form of communal worship helped break the shackles of caste and community and was able to engage people from all walks of life into worshipping Lord Krishna. Swami Chaitanya emphasized chanting the ‘Hare Krishna Mahamantra’ (meaning the great mantra from Upnishads which he modified slightly). Gaudiya Vaishnavas believe

The devotees of ISKCON believe Swami Chaitanya to be an incarnation of Lord Krishna himself. It describes Krishna as the source of all the incarnations of God. The ISKCON devotees worship Krishna as ‘swayam bhagvan’ (the highest form of God). It was Swami Prabhupada himself who coined this phrase.  The teachings describe ‘Radha’ as Lord Krishna’s divine female counterpart and the embodiment of divine love.

The architecture of the temple:

The ISKCON temple is built in the contemporary architectural style, which pays a beautiful tribute to the architects, builders and ever worked involved in its construction. The structure is made of exquisite white marble and has a very soothing and calming effect on the people who enter the temple premises. The air is filled with the chanting of the Maha Mantra ‘Hare Rama Hare Krishna’. The temple has a grand façade, which looks stunning. The temple is so huge that it can be seen from any corner of Vrindavan city.

On entering the temple complex, the devotees are greeted by a white marble samaadhi of Swami Prabhupada. There are also several gilded images of him, which is a very enchanting view.

The garbh-gruha (main sanctum) of the main temple houses the various idols. Inside there are 3 main sets of idols. The main deities of the temple are Krishna and his brother, Balarama. These idols are housed at the central altar. On the right altar are the idols of Radha-Krishna with Gopi, Lalita, and Vishakha. On the left altar is an idol of Swami Chaitanya Mahaprabhu with Nityananda, and of Bhaktivedanta Swami Prabhupada and his spiritual teacher Bhaktisiddhanta Sarasvati Thakura.

The idol of Radha, lovingly called “Radha-Rani’, is very beautiful. It is said that if you look at her face for some time, you would ‘fall in love with her image and would not be able to take your eyes off her.

Everywhere across the temple, there are several galleries that depict several images of Lord Krishna. These images depict the various antics and other scenes from his life. The complex is divided into several sections where religious and cultural activities are conducted throughout the year. A lot of people of foreign origin can also be seen in and around the temple. Krishna-Balaram Mandir enforces one of the highest standards of cleanliness and of deity worship in all of Vrindavan 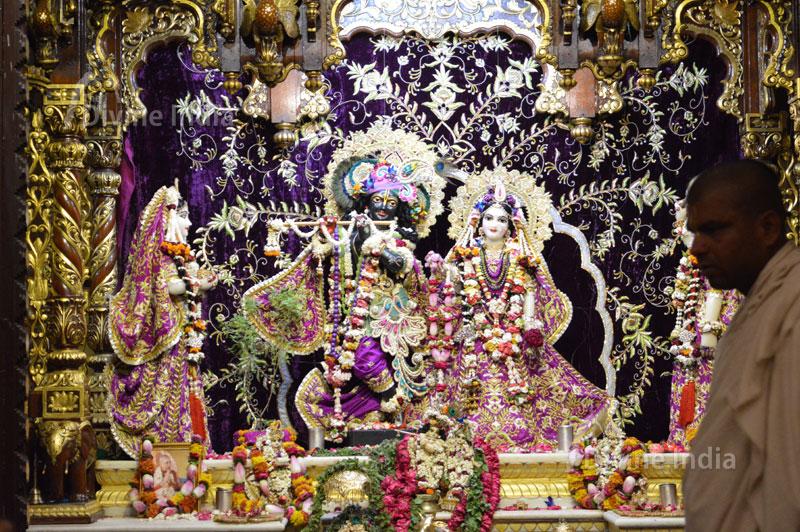 “Sankirtan’ is the most famous and unique practice followed by ISKCON devotees, which distinguishes them from others. This practice involves publicly chanting or singing the Hare Krishna mantra. Devotees gather in public places like parks, streets, or even airport and sing the mantra using various musical instruments like ‘mridang’, ‘manjire; (hand cymbals), and the harmonium.

Other than Sankirtan, ‘Jaap, or practice of chanting of the Mahamantra is also an important practice. Devotees use a rosary bead to count the chantings. A rosary bead contains 108 beads, with a meru in the middle. To help the devotees, Swami Prabhupada established a standard of chanting 16 rounds of the Mahamantra in a day. Each round requires chanting the maha-mantra 108 times on prayer beads. Devotees do 16 rounds of praying with rosary beads, which makes it (108 X16) = 1728 repetitions and takes about 2 hours. In modern times, it is believed to be the only way to salvation for common people.

Another important practice is ‘Aarti’ or “Puja’. Here, the devotees offer water, incense, a fire lamp, and flowers to the idol of Lord Krishna. This is accompanied by prayers and singing ‘bhajans’ (devotional songs, which praise Lord Krishna). The devotees bathe the idol, dress it, offer it ‘bhog’, and even put it to sleep. By doing so, the devotees aim to deepen their relationship with Krishna.

There are several festivals and rituals performed at the ISKCON temple every day, with many devotees participating in the events. These festivals are celebrated with great religious and spiritual fervour. The major festivals celebrated in the temple are Janmashtami, Radhastami,  Ram Navmi, Holi, Guru Purnima, Diwali, Annakoot among others.

Since the main deity at the temple is Lord Krishna, so his birthday (Janmashtami) is celebrated with great enthusiasm and fervour. The entire temple is decked up with flowers, flags, ribbons and garlands, and the whole town of Vrindavan participates in this celebration.

Similarly, another festival that is celebrated with great enthusiasm is Holi, which also has a connection with the life of Lord Krishna.

How to reach ISKCON Temple, Vrindavan:

Q. 1: What is the other name of ISKCON Temple at Vrindavan?
Ans: Sri Krishna Balrama Temple

Q. 2: Which is the first ISKCON temple of India?
Ans: ISKCON Temple at Vrindavan

Q. 3: What is the full form of ISKCON?
Ans: International Society for Krishna Consciousness