Well known across the world for a huge Bahubali statue, the Gomateshwara Temple at Shravanabelagola is a very famous pilgrimage for people belonging to Jainism. But due to this impressive statue, many people from other religion also come and visit his temple.

Gomateshwara Temple, also known as Bahubali temple is one of the most famous Jain pilgrimages in South India. The temple is located in the beautiful town of Shravanabelagola, Karnataka. The city of Shravanabelagola, known for its ponds and temples, is located at a distance of 83 km from Mysore and about 160 km from Bangalore. It is one of the eminent heritage sites in Karnataka.

The city of Shravanabelagola has two famous hills, named Vindhyagiri and Chandragiri. The statue of Bahubali is located on Vindhyagiri Hill. 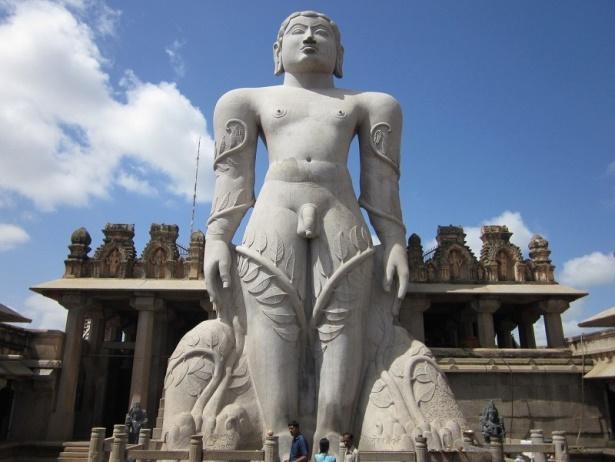 History Of The Temple:

The Gomateshwara Temple was built in the 10th century CE by Chamundaraya, who was a poet and minister from the Western Ganga Dynasty.

The base of the statue has an inscription that lauds the great work done by the King who sanctioned the funds to build the statue and the efforts of his minister, Chavundaraya, who played a key role in getting the statue erected. The statue built by the king for his mother is a monolith structure, which means it has been built from a single rock. . The 18 m (60 feet) tall monolith statue, built out of granite, gives an idea about its size. The statue is so huge that it can easily be seen even from a distance of 30 km.

Legend Associated With the Gomateshwara Temple:

As per the legends mentioned in the religious Jain texts, the first Tirthankara was Rishabh deva, also called Adinath. It is believed that Adinath had a total of 100 sons. His eldest son was Bharatha and the second son was Gomateshwara (also known as Bahubali).

When Rishabh deva left his kingdom, he divided his kingdom into 100 and gave one part of the kingdom to each of his sons. But Bharatha wanted to be the supreme king. His 98 brothers (except Bahubali) decide to renounce the world and become Jain monks, but Bahubali did not agree to it and challenged Bharatha for a fight.

But, since both Bharatha and Bahubali were brothers, and the ministers and the brothers also did not want to kill each other. So, it was decided to settle this dispute in a unique manner. Three different kinds of contests were planned, which did not involve any bloodshed. These three contests planned were:

Bahubali defeated Bharatha in all the contests and thus became eligible to become the King. But after defeating his own brother in the combat, Gomateshwar was not very happy with the sourness that had developed between him and his brother, Bharatha. Gomateshwar was filled with remorse and repentance. This unrest in his heart and mind became so strong, that he finally decided to renounce everything and go to the forest in search of the ‘true’ meaning of life. So, he renounced all clothes, ornaments, and the kingdom. He made Bharatha the King and left for the forest to achieve ‘Keval Jnana’. This is a very important term in Jainism and means complete understanding or ‘supreme wisdom’

He started meditating for long durations. Once he mediated for one full year in a standing pose. It is believed that during that one year, he did not move at all, so much so climber plants started growing around his legs. His whole body was covered with dust, plants, and even ants. But he meditated unperturbed.

According to Jain texts, on the last day of his year-long fast, his elder brother Bharatha came to him and worshipped in while humility and respect. This removed the guilt of having hurt his elder brother. Bahubali was thus freed of the 4 bad karmas that stop a soul from becoming pure and attained the ‘kewal jnana’. He even attained the ‘moksha’ (the final salvation) and was turned into a pure, liberated soul, called ‘Siddha. As per Jain texts, Bahubali was one of the first Digambar (Jain devotees who believe that the sky alone is their attire) monks to have attained moksha in the present half-cycle of time.

The eyes of the statue are open and view the world with a sense of complete detachment to anything that is a worldly pleasure. Such a detachment can only be possessed by someone who is learned and has the ‘kewal jnana’, a person who has become ‘Siddha and attained salvation.

The statute has a perfect chiselled facial expression and a faint smile at the corner of his mouth that signifies calmness and vitality. The amazing part of the statue architecture is that the statue is that there is no support from thigh upwards and the whole figure is standing on an open lotus. The statue is accompanied, on either side, by two opulently ornamented and intricately carved royal servants named yakshi complimenting the main figure.

Every 12 years, a major festival is celebrated here. Called Mahamastakabhishek (great anointment) festival’, the festival involves abhishekam (anointment) of the statue. Thousands of devotees from across the world come here, and they sprinkle water on the statue from a high especially prepared platform. There are 1,008 special ‘kalash’ (vessels) made for this purpose. After sprinkling water, the huge statue is given a bath with milk, sugarcane juice, and kesar (the saffron flowers paste). The idol is then sprinkled with a powder of sacred items like chandan (Sandalwood), haldi (turmeric), and sindoor (vermillion). Devotees offer flower petals, gold and silver coins, and precious stones. The last ceremony included an enormous shower of flowers from a waiting helicopter, as the finale to the main event. 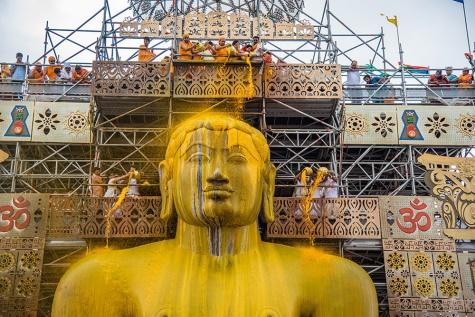 This is a very big festival and attracts the attention of many people and media houses to the Gomateshwara Temple. The last Mahamastakabhishek festival was held in February 2018 and the next one is expected to be held in the year 2030. The ceremony is held under the supervision of the head priest of Shravanabelagola and is graced by several Jain ascetics.

In the year 2007, this marvellous statue of Bahubali was conferred with the first position among the seven wonders of India.

How to Reach Gomateshwara Temple?

To reach the Gomateshwara Temple situated at the top of Vindhyagiri Hill, the devotees have to climb a long series of steps. There are 614 steps in total. On the way to the top of the hill, many smaller temples have been erected on the hill. There are 800 inscriptions around the site, which indicate the statues to be dated sometime between 600 CE and 1830 CE.

There is no fixed time to reach the temple, but if you are a nature lover and want to witness a beautiful sunrise, then you must reach the temple top before 6:30 am. At this time, you can get a beautiful glimpse of the rising sun, which will be a treat for your eyes as well as for the lens of your camera.

In terms of months, the winter season from October to March is the best time to visit the temple. The weather is very pleasant during this time.

Q. 1: What is another name of Gomateshwara Temple?
Ans: Bahubali Temple

Q. 2: Who built the Bahubali statute?
Ans: The statute was built by Chamundaraya, who was a poet and minister from the Western Ganga Dynasty.