What is Durga Puja?

Also called Durgotsava, Durga Puja is a Hindu festival where people pay respect and worship Goddess Kaali (a form of Goddess Durga). Though celebrated across India, it is more popular in the eastern and northeastern states of India, particularly in West Bengal, Odisha, Assam, Tripura, and Mithilanchal (Bihar). People belonging to this diaspora across the country, wherever they may be also celebrated this festival with the same fervour. The festival is celebrated outside India also, especially in Bangladesh and Nepal.

When is Durga Puja 2022 celebrations?

Durga Puja in 2022 is celebrated during the ‘shukla’ paksh of the month of Ashvin, as per the Hindu calendar, which as per the Gregorian calendar falls in the month of September or October. Though celebrated for 10-days, from ‘ekam’ to ‘dashmi’, the last 5-days are of great significance. The last day of Durga Puja coincides with Dussehra or ‘Bijoya Dashomi’. 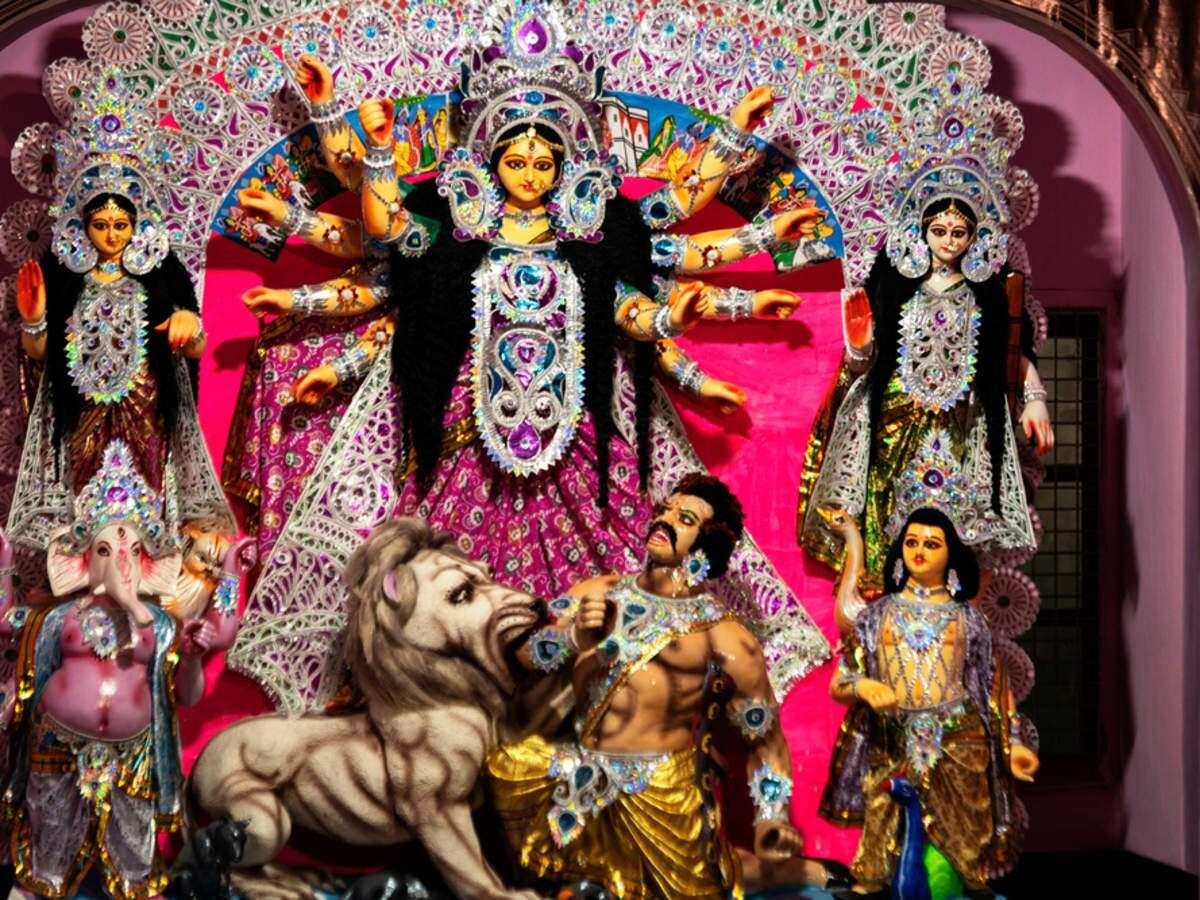 How do people celebrate Durga Puja?

During these days people worship Goddess Kaali at home. At several places, huge pandals are erected, where people install huge idols of Maan Kaali. At these pandals other than worshipping the Goddess several literary and cultural activities are competitions are also performed. People recite scriptures, perform traditional dance and music, and encourage children.

Why is Durga Puja celebrated?

During the ‘Satyug’, the devtaas were in constant war against the demons. There was a demon, called ‘Mahishasura’. The word ‘mahisha’ means buffalo and ‘asur’ means demon. So, Mahishasur means Buffalo demon. Mahishasura was a very powerful demon. He had a boon that no man could kill him. He also had the ability to change shapes. So, encouraged by these boons, he challenged devtaas and defeated them.
Defeated by Mahishasura, all devtaas decide to fight him together. The ‘tridevs’ (Bramha, Vishnu, and Shiva) came together to create a powerful female form, who had ten hands. The form appeared from the holy water of river Ganga. All the gods combined their divine energies to give her a physical form. That’s how Goddess Durga (also called Mahamaya) was born. The word ‘durg’ in Sanskrit means a fortress, something that is difficult to defeat or pass through’. So, ‘Durga’ means invincible, someone who cannot be defeated.
Another name for Durga is ‘Durgatinashini’, which can be broken down into Durgati + Nashini, and means one who eliminates suffering. The name ‘Durga’ signifies someone who protects her devotees and destroys evil forces in the world.
Now armed with the blessings of gods and their divine weapons, Goddess Durga rode into the battle sitting on a lion. There was a fierce battle between the two, and finally, Goddess Durga killed Mahishasur with her Trishul (trident), and earned the title of ‘Mahishasuramardini’, which means ‘the killer of Mahishasur’.

How is the festival celebrated?

Durga puja is a ten-day event, starting from the first day of Navratri (ekam tithi) to the 10 th day (dashmi) of Ashvin month, during the shukla paksh, which is the phase of the increasing moon. Out of these 10 days, the last 5 days are of great importance and involve certain rituals and practices.

This year in 2022, Durga puja begins on the ‘panchmi’ (fifth day) of the Ashvin month. It is celebrated as Mahalaya, a day dedicated to the ‘pitru dev’ (dead ancestors). On this day, Hindus perform ‘tarpana’ and offer water and food to their ancestors. This day also symbolizes the advent of Goddess Durga from her mythological marital home in Mount Kailash.
The next day, which is the ‘sashti’ (sixth day) is very significant. On this day, people bring idols of Goddess Durga and install them in the pandals. This is the day when the main festivities start.
The next three days – from ‘saptami’ (seventh day) to ‘navami’ (ninth day), people worship Goddess in her various forms as Durga (the goddess of Shakti), Lakshmi (the goddess of wealth and prosperity), and Saraswati (the goddess of knowledge and literature). In addition to worshipping different forms of Goddess, people also worship Lord Ganesh (god of intelligence and trouble-shooter), and Lord Kartikeya (god of war). These 3 days are the main days of the festival where people visit the nicely decorated ‘Durga pandals’ and offer their prayers to the goddess. Various cultural and literary activities are performed during these days, where in addition to these activities; people recite Holy Scriptures and legends of Durga. People visit their friends and relatives and wish them.

Rituals performed before the Durga Puja:

Before the puja starts, the following rituals are performed:

In many places, people perform ‘Kumari Pooja’ where they invite pre-pubescent girls, wash their feet, apply tilak on their forehead and worship them. Then, they are offered some prasad and gifts or cash. People take their blessings.

The dashmi is the day when Goddess Durga killed Mahishasura and then returned to Mount Kailash. So, to mark that occasion, people take the idols of Goddess Durga in a ceremonious procession to a water body, where the idols are immersed. During the procession, people sing and dance and chant slogans praising the goddess. After the immersion, it is believed that Goddess Durga returns to her mythological marital home at Mount Kailash, taking away all the sorrows of people and giving them gifts of joy and happiness. On this day, people go and meet their family, friends, and relatives, distribute sweets, and exchange gifts and wishes. This marks the end of the festival.

Q. 1: When is Durga Puja celebrated?
Ans: Durga Puja is celebrated during the 10 day period from ‘ekam’ to ‘dashmi’ of the Ashvin month of the Hindu calendar during the ‘shukla’ paksh.

Q. 2: What is the meaning of Mahishasur?
Ans: The word ‘mahisha’ means buffalo and ‘asur’ means demon. So, Mahishasur means Buffalo demon.