The Badrinath temple located in Badrinath, Uttaranchal , India is among the most sacred of  temples for Hindus around the world. According to Hindu mythology, it is the ‘trinity’ of Lord Bramha, Lord Vishnu, and Lord Shiva which is associated with the formation, maintenance, and ultimately destruction of this universe. Of this trinity, Lord Vishnu has the responsibility of running the universe. And in order to do this, he is believed to have taken several ‘avtaars’ (incarnations). Lord Vishnu is worshipped in various forms in thousands of temples across India, and even outside India.

Very popularly known as one of the ‘Chaar Dhaam’, (4 pilgrimages), or ‘Chhota Char Dhaam’ (chhota, meaning small) Badrinath, is one of the most important religious places for the Hindus across the world. Char Dhaam in the Hindi language means Four Dhaams (Four religious places) and is a collective term to indicate the religious circuit within Uttarakhand, which covers the four important and holy Hindu pilgrimage centers, namely Badrinath, Kedarnath, Gangotri, and Yamunotri. It is among the most visited pilgrimage sites of India, where millions of people visit every year to pay their respect to Lord Vishnu.
One of the very interesting facts about Badrinath is that though the temple is located in North India, the temple’s head priest (called the Rawal) is a Nambudiri Brahmin, who traditionally comes from the South Indian state of Kerala. It is believed that Adi Shankara, who was a South Indian philosopher, started this tradition. The priest has to practice bachelorhood.
The temple remains open only for 6 months, during summers. As soon as the winters approach, the doors of the temples are closed. On this occasion, the temple is decorated with flowers, and special pujas are performed on the day by the chief priest. A huge ghee lamp, called ‘Akhand Jyoti’ (never-ending light) is lit inside the temple, which lasts for 6 months.  The idol is shifted to the Narsingh temple at Joshi Math, where the deity is worshipped for the next 6 months. Around April or May, the idol is shifted back to Badrinath, when the temple re-opens. Thousands of people visit the temple to have a darshan of the Akhand Jyoti. 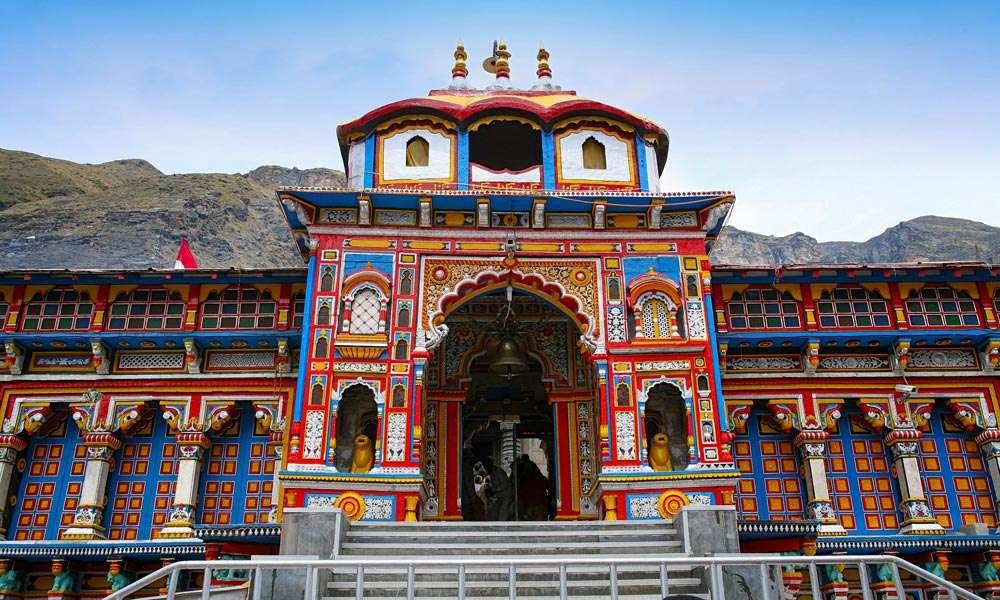 Location of the temple:

One of the most famous places of worshipping Lord Vishnu, Badrinath is also called ‘Badrikanath’, or ‘Badrikaaashram’. It is one of the 108 ‘Divya Desams’ dedicated to Lord Vishnu, where he is worshipped as Badrinath. This holy shrine for Vaishnavites is located in the Chamoli district, along the river Alaknanda, in the state of Uttarakhand.
The main attraction of the city is the Badrinath temple, which is located at an average height of about 3,100 meters above sea level. This sacred town of Badrinath is located between the ‘nar’ and ‘narayana’ mountain ranges in the Garhwal hill

Badrinath finds a mention in several ancient religious works of literature Bhagavata Puraan, Skanda Puraan, and even Mahabharata.  According to Bhagavata Puraan, it is here in Badrinath that two sages, Nar and Narayana, (both incarnations of Lord Vishnu) are in penance since time immemorial for the welfare of all living beings. As per the Skanda Puraan, “(t)here are several sacred shrines in heaven, on earth, and in hell; but there is no shrine like Badrinath”. The Mahabharata reveres the holy place as the only place, where a person can attain ‘moksha’ (Salvation), merely by coming close to the place, without having to perform any religious ceremony. In Tamil literature, the temple is referred to as Tiruvatariyaacciraamam.

Badrinath is considered to be the most sacred religious place for Hindus, to get rid of their sins and pave the path to the ultimate goal of human life – the Moksha, (salvation and freedom from the cycle of birth & death in this world).
Badrinath is one of the holy places where the Hindus offer ‘tarpan’ (oblations to ancestors). Devotees have a holy dip in the Alaknanda River and then go for darshan. It is believed that a dip in the holy river purifies the soul.
Badrinath temple is among the ‘Chaar Dhaams’ located across the four corners of India. While Badrinath is in the North, the other three are Jagannath Temple at Puri, Odisha (East), Dwarakadheesh Temple at Dwarka, Gujarat (West), and Rameshwaram Temple at Rameshwaram, Tamil Nadu (South).
Chaar Dhaam Yatra is one of the very important rituals. Every Hindu is expected to perform this yatra at least once in the lifetime. Traditionally, the yatra starts at the eastern end from Puri and then proceeds in a clockwise manner (as typically followed for circumambulation in Hindu temples). So, the yatra starts from Puri, and then moves to Rameshwaram, Dwarka, and finally at Badrinath.
In addition to the main ‘chaar dhaams’ mentioned above, there are four abodes called the ‘Chhota Chaar Dhaam’ (Chhota meaning small). All these abodes, namely Badrinath, Kedarnath, Gangotri, and Yamunotri lie in the foothills of the Himalayas.  The name Chhota was added in the last century to differentiate these dhaams from the original Char Dhaams. Now, these are also called ‘Himalayan Chaar Dhaams’. 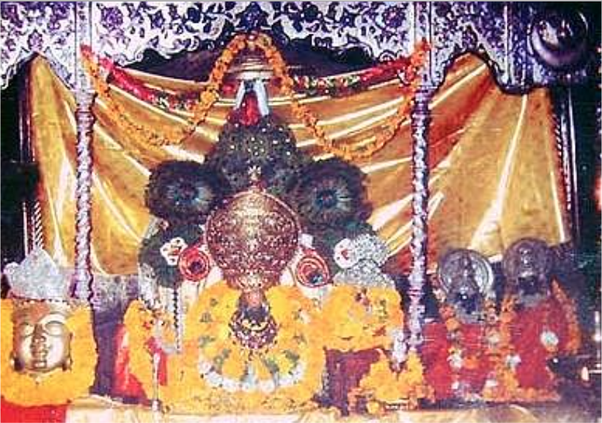 There are several legends associated with the Badrinath temple and the area surrounding it. One of the legends goes back to long time ago, much before the birth of Lord Rama, among his ancestors, was a great ‘suryavanshi’ Sagar, who was suffering from a curse, and his souls of his 60,000 sons were not able to get salvation. So, one of his descendent, King Bhagirath decided to provide salvation to their soul. He decided to bring River Ganga to Earth and help the suffering souls. He prayed to Lord Bramha, who ordered River Ganga to descend to Earth. When Ganga was coming down to earth, her force was too much to handle. Then Bhagirath requested Lord Shiva to control her flow. Lord Shiva came in the way and trapped Ganga in his thick matted hair, and then released it gradually. Bhagirath led the river to the place where the ashes of 60,000 sons of King Sagar laid, and with the flow of Ganga, these souls were liberated. One of the streams, which emerged out of this flow, is what we know as river Alaknanda. The day when river Ganga descended to Earth is still celebrated as “Ganga Dussehra’
According to another legend, once Lord Vishnu sat for meditation at this beautiful place. However, he was not aware of the cold weather. To protect him from cold, his consort, Maan Lakshmi took the form of a huge Badri tree (jujube or Indian date-Ber/Beri). Pleased by her devotion, Lord Vishnu named the place as Badrika Ashram. Maan Lakshmi was called “Badri Vishal” (a large Beri/jujube) and Lord Vishnu as “Badrinath” (husband of Badri).

History of the temple:

The temple is believed to have been established in the 8th century by Adi Shankaracharya (meaning first Shankaracharya), who lived in this place for 6 years. He used to say 6 months in Badrinath and 6 months in Kedarnath.
According to a legend, once he discovered a black stone idol of Lord Badrinarayan made of ‘saaligram’ stone in the Alaknanda River. He took the stone with him and enshrined it in a cave near the Tapt Kund (hot springs). In the 16th century, the King of Garhwal moved the idol to its present temple.
Since then, the temple has undergone several repairs and renovations owing to its age and natural calamities. In the 17th century, the King of Garhwal got the temple expanded. After the great Himalayan earthquake in 1803, the temple suffered huge damage. But due to the efforts of the King of Jaipur, the temple was renovated once again.

Badrinath temple is a beautiful reflection of the traditional North Indian style of temple architecture. The temple is constructed out of stone, and the walls and pillars have numerous intricate carvings. Badrinath temple has 3 main structures. A tall arched gateway at the entrance leads to Sabha Mandap convention hall, where the devotees assemble). This leads us to the Darshan Mandap (worship hall, the place from where Pooja to the idol is performed) and finally to garbha-griha (main shrine area, or sanctum).
The roof of the garbha-griha is conically shaped with a height of about 15 m (49 feet) and has a small cupola on its top, covered with a gold gilt roof. The façade of the temple is built out of stone and has arched windows.
The ‘garbha-griha’ or the main shrine area houses the 1 feet (about 30 cm high) black stone idol of ‘saaligram’, the presiding deity of Badrinath temple. The idol is housed in a gold canopy under a Badri Tree, which represents Goddess Lakshmi. The deity of Lord Badrinath shows Him holding a ‘shankh’ (conch) and a ‘Sudarshan chakra’ (wheel) in two of His arms in a lifted posture and the other two arms resting on His lap in a position of yoga, called the ‘Padmasana’. This idol of Lord Vishnu is believed to be one of the eight ‘swayambhoo’ (meaning self-manifested) idols. Along with the idol of Lord Vishnu, there are idols of Kubera – the heavenly custodian of wealth, Devarshi Naarad (a sage and an ardent follower of Lord Vishnu. Who keeps chanting his name), Uddhava, and the two incarnations of Lord Vishnu, Nar, and Narayan.
In addition to these idols, there are some more idols around the main temple, which are also worshipped. These idols are of Maan Lakshmi (goddess of wealth and consort of Lord Vishnu), Garuda (the mythological vehicle of Lord Vishnu), and Navdurga, the manifestation of Goddess Durga in nine different forms. The temple also housed shrines of Lakshmi Narasimha, the great saint Adi Shankara, Nar, and Narayana (the two incarnations of Lord Vishnu, who are believed to be in penance since times immemorial), Vedana Desika, and Ramanujacharya. The idols of all these deities are made of black stone.
The temple also houses a ‘Tapt Kund’ which is actually a group of hot sulphur springs just below the temple. The water of this spring is said to be medicinal. Most pilgrims visiting Badrinath consider it a mandatory ritual to take bath in the springs before visiting the temple. The water in these springs has a temperature of about 55 °C (131 °F) round the year, while the outside temperature is typically below 17 °C (63 °F). The two water ponds in the temple are called Naarad Kund and Surya Kund.

In the morning there is Mahabhishek (ablution), Abhishek, Gita Paath, and Bhagavat Puja, while in the evening the pujas include Geet Govinda and aarti. After the daily aarti, the decorations are removed from the deity’s idol and sandalwood paste is applied to it. This paste is given to the devotees the next day as ‘prasad’ during the nirmalaya darshan. Unlike most other temples, in Badrinath, all these rituals are performed in front of the devotees.  Prasad is also distributed to all the devotees.

The temple is open for only 6 months in a year –i.e. in summers. The temple is closed around the time of Diwali (October/November) and re-opens after 6 months around April or May. So, the best time to visit Badrinath is from May to October, where you can enjoy the scenic beauty and the weather is also pleasant.

How to reach Badrinath?

Badrinath is a very sacred place. The place is visited by devotees of all faiths and all schools of thought of Hinduism visit the Badrinath Temple. There is no restriction for anyone, including foreigners, women, etc. There is no particular dress code also, though being a religious place; people are advised to dress decently. People visiting the area are requested not to use polythene bags, to preserve the sanctity of the temples and preserve the environment.

Q. 1: Is Badrinath temple open round the year?
Ans: No, the temple remains open only for 6 months, during summers. As soon as the winters approach, the doors of the temples are closed.