Ashtami is celebrated on Thursday 28th, October 2021 and is part of the Durga Puja festival.

What is Ahoi Ashtami?

Ahoi Ashtami is celebrated between ‘Sharad Purnima’ and Diwali, both of which are celebrated in a gap of 8 days on either side of Ahoi Ashtami. According to the Purnimant calendar largely followed in the north of India, Ahoi Ashtami is celebrated during the ‘krishna’ paksha of the Kartik month. While according to the Amanta calendar largely followed in the west and south of India, (mainly Gujarat, Maharashtra, and other southern states), it falls during the month of Ashvin. However, it is only the month’s name that is different. Everywhere the fast is done on the same day. 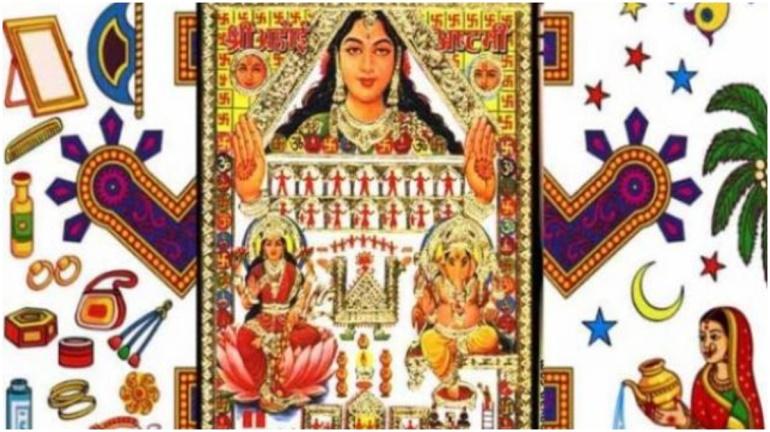 How is Ahoi Ashtami celebrated?

On the day of fast, the ladies wake up early and take a bath. After taking the bath, the women remember goddess Ahoi and take a pledge (called Sankalp) to fast the whole day and pray to the goddess for the safety, long life, and prosperity of their children. The mothers take a pledge to fast without taking food or water for the whole day. Depending upon the family tradition, the fast is broken after sighting the stars or the moon, as the case may be.

The ladies complete their preparations for the Ahoi puja, before the sunset. The ladies draw an image of Goddess Ahoi on the wall using ‘geru’ (coloured soil). Some ladies make an embroidery of the goddess on a piece of cloth and hang it on a wall. There are many images available for Ahoi Mata, and you may use any of the images. The picture has images of many young children.

After making the image, the place is cleaned properly and sanctified with ‘gangajal’ (water of the holy river Ganga). Colourful alpana (motifs) of the sacred religious symbols are drawn on the floor. Some wheat grains are taken and a heap is made out of the grains to make a raised structure. A wooden stool can also be used. A kalash (pot) filled with water is taken and placed on top of this heap of wheat grains, or the wooden steel. Taamba and Peetal (Brass) are believed to be an auspicious metal, so we always use a kalash made of these metals. Then, the kalash is covered with an earthen lid. 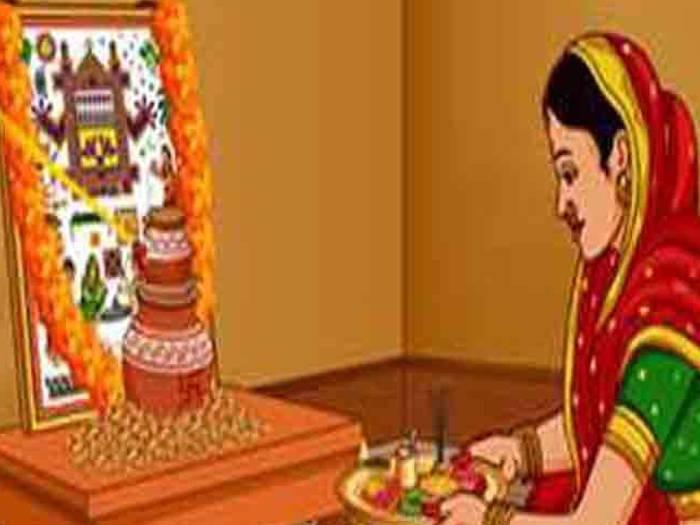 After this, a small ‘karwa’ (earthen pot) is kept on the top of the kalash. Water is filled in the karwa and its lid is also covered. The nozzle of the Karwa is blocked with the ‘durva’ (young green grass). Seven shoots of ‘durva’ are offered to Ahoi Mata. In case, ‘durva’ grass shoots are not available then cotton buds can be used.

Bhog is offered to Ahoi Mata, which includes 8 pooris (a type of chapatti made in oil), 8 Pua (a sweet), and Halwa. After the pooja, these food items are given to a Brahmin along with some money.

There are many stories associated with Ahoi Ashtami. Even the most common story has different versions. Here, we are sharing the most commonly believed story. This story is shared at the time of performing puja as well.

Once upon a time, there lived a sahukar (moneylender) in a village. He had 7 sons and 1 daughter. All his sons were married, and even his daughter was married in some other village. Once it so happened, that his daughter came to stay at her maternal home, during the month of Kartik, just a few days before Diwali. Since Diwali was round the corner, the sahukar’s wife wanted to renovate and paint her house. So, she asked her daughters-in-law to go to the forest and fetch some soil for painting the house. So, all seven of her daughters-in-law went to the first. The sahukar’s daughter also went with her sisters-in-law to get the soil. The place where sahukar’s daughter was digging, there lived a ‘syahi’ (porcupine) with her children. While digging the soil, the daughter accidentally killed one of the children of the ‘syahi’. The ‘syahi’ got angry and cursed the daughter that she will tie her womb, which means she will never be able to bear a child. Listening to this, the daughter got worried. She requested her ‘bhabhis’ (sisters-in-law) to take the curse on them. All of the elder sisters-in-law refused to do so; finally, the youngest one agreed and took the curse on her.

After this incident, whenever the youngest one had a child, the baby would die within a few days. This way, she lost 7 children. Then one day, an astrologer came to their home. When she asked the reason for this, he reminded her of the curse given by the ‘syahi’. When she asked for a remedy for this, the astrologer advised her to serve a cow. She did as advised, and served the cow with full devotion. The cow was very happy with her devotion. So, she took the youngest ‘bahu’ (daughter-in-law) to that ‘syahi’ and told her how the youngest bahu had taken care of her. The ‘syahi’ was pleased with her care and devotion. She not only forgave her but blessed her fertility. Later she had 7 children, and she enjoyed a blissful life.

Ahoi Ashtami is called Krishna Ashtami as well. When a woman, who is married, but having a problem having children performs the prayers and rituals of Ahoi Ashtami, it is called Krishna Ashtami. This is after the name of Lord Krishna, who blesses such ladies with children.
Many people associate his festival only with boys. Bu this is not so, A lady who is child-less can perform this fast, and expect to get blessed with a healthy baby, which may be a boy or a girl.

Q. 2: What do mothers do on Ahoi Ashtami?
Ans: On Ahoi Ashtami, mothers fast for a whole day without food and water.

Q. 4: Who is the goddess Ahoi?
Ans: Goddess Ahoi is one form of mother Parvati.