Kanchipuram Temple is a group of temples located in Tamil Nadu, India. Kanchipuram is famous across the world for 2 reasons – the beautiful hand-woven silk Kanjeevaram sarees and for its numerous temples. Also known by its ancient names Kanchiampathi and Conjeevaram, the city is also referred to as ‘the city of thousand temples’. Out of these temples, the most prominent temples are that belonging to Lord Vishnu and Lord Shiva.

Kanchipuram is one of the holiest and ancient cities of India. This city is situated on the North-Eastern Coast of Tamil Nadu and is located close to Chennai. The central location is surrounded by Thiruvannamalai in the South, Thiruvallur district in the North, Chengalpattu District in the East and Vellore district in the West.

Kanchipuram is known as the temple city for its endless temples. The city has temples in almost every streets and lane. For this, Kanchi is vividly recognized for the rich Hindu heritage it serves with historical temples created during the reign of Pallava, Chola and Vijayanagar in and around the 6th to 9th Century. The most famous temples are those belonging to Lord Vishnu.

As per Hindu mythology, a ‘kshetra’ (region) is believed to be sacred ground and a field where god’s power can be felt. If a person visits these places, he/she can attain ‘moksha’ (final salvation). According to the Garuda Puraaan, there are 7 such regions across India. Kanchipuram is one of these cities. The other cities are Ayodhya, Mathura, Haridwar, Kashi (Varanasai), Avantika (Ujjain), and Dwarika.

The History of Kanchipuram

Kanchipuram boasts of very rich history. The city has been its origin in Tamil culture between the Sangam period of the 2nd and 3rd century BCE. The city had its mythical origin in the Dravida Kingdom of Mahabharata and is also cited by Kalidasa in the 4th Century. Kanchipuram city had also been referred to in Sangam literature in Tamil dated back then in 300 BCE.

The city has been ruled by rulers from several dynasties. This city was the Pallava capital from the 4th to 9th century CE. With various rulers coming over and going, ruler Vikramaditya II recaptured the reign with inscriptions captured of the same. Kanchi lately became the hometown of famous poets like Bharavi (popularly known for Kiratarjuniya) and famous philosophers like Ramanuja. Still today, Kanchipuram is full of notable inscriptions and around 120 temples created by the deities.

As such there are 15 major temples in Kanchipuram. Out of the total, 9 of the most famous temples are:

This is the oldest shrine located west on the banks of the Vedavathi River. The temple was built by the Pallava ruler, Narsimhavarman II (also called Rajasimha). This temple faces the east side in the Kanchipuram city of Tamil Nadu. This temple holds a shrine for the deity of Lord Shiva. For this, the temple has a 16-sided Shivalinga fabricated out of black granite. The temple’s beauty also lasts in the pillars which have sculptures of minor deities. This temple attracts vast tourism, especially during Mahashivratri and is visited by thousands of Hindus. 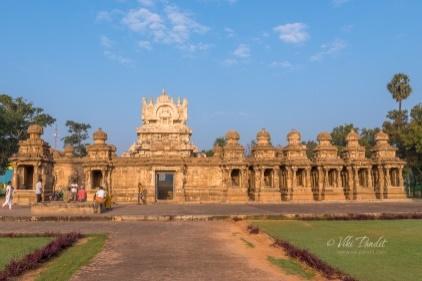 Spread over an area of more than 10 hectares, this is the largest temple of worship in Kanchi. This temple dedicated to Lord Shiva is very popular among devotees as one of the largest 5 shrines of Lord Shiva. This temple was established by the rulers Pallava dynasty between the 4th to 6th centuries CE but went through many modifications done by the Tanjore Nayaks. The temple has major attractions like 1000 lingas made of solitary stones, a 3500 years old mango tree, a hall with 1000 pillars etc. The temple is also recognized for celebrating the famous festival called Panguni Brahmotsavam which is a grand fest celebrated between March and April. 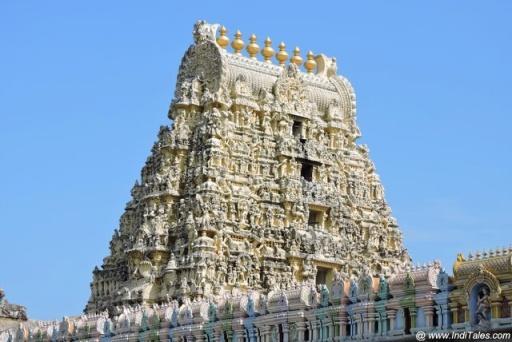 This temple is the shrine of Lord Vishnu and is followed by Hindus following Vaishnavism. The major noticeable factor here is 108 Divya Desams of Lord Vishnu which were visited by the 12 Alwars. This makes it a sacred Vaishnavite shrine that is visited by many. The Varadaraja Perumal Temple features a hall with 100 pillars of sculptures depicting the Hindu Gods. Popular festivals of this temple include Vaikunda Ekadasi, Vaikasi Brahmmotsavam and Purattasi Navaratri. The 10 fests attract tourists and especially Hindus from all across the world. 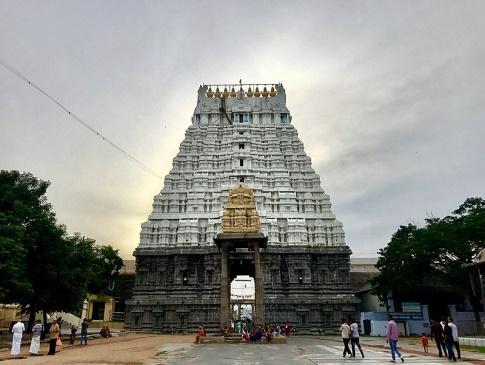 This temple is the home to Goddess Kamakshi, who is said to be the reincarnation of Goddess Parvati. (Wife of Lord Shiva and inspiration of love and fertility). The temple is believed to be built for holding the body parts of Goddess Parvati that fell from her corpse in heaven. Her naval is the divinity leading to the construction of this temple.

This temple is also one of the oldest temples built by the Pallava rulers. The temple is rich in its legends and myths, yet the specifications of the sculptures are still unknown. There are stories that link the temple to Adi Shankara and the saints staying in Kanchi Kamakoti Mutt, which is a Hindu religious institution run by the same. Kamakshi Amman Temple is the host of the chariot festival held in the month of ‘Masi’ that falls between February and March and is also a hub for the market.

This temple is of special significance for the Jains. This temple is for Jainism of Kanchipuram which was created long back by the rulers of the Pallava dynasty. This is because the temple features sculptures of prominent Jain deities and is popular for its wall arts, paintings and sculptures. The temple signifies the Dravidian style of architecture which is the secret for the exquisite look of the temple.

Ulagalantha Perumal Temple is also one of the 108 Divya Desams. The temple is among the most important temples of Lord Vishnu and it gets its name from Vaamana, the 5th Avatar of Lord Vishnu. The temple too is one of the divine architecture of the Dravidian style. The temple is a host for more than 12 annual fests grabbing a vast crowd from Tamil. The most popular festivals are ther-vizha and Brahmotsavam.

This temple is among the most beautiful, architectural and historic temples in Kanchipuram. The architecture of the temple takes significance from Pallava, Chola and Vijayanagara dynasties. Most importantly, the temple has a pond amidst the four walls which makes it unique. The pond has a mythological story related to Gajendra Moksha. This temple is popular for its 10-day long celebration of the festival of Vaikunta Ekadasi. The festival is among the important ones considered for Vaishnavism. The festival gathers thousands of Hindus for this massive event.

Unlike other temples, the main deity at this temple is Chandragupta Swamy, who is believed to assist Yamraj, (god of death) in maintaining an account of the good and bad deeds of human beings. Although small in size, the temple attracts thousands of people because of the mythological fact that, it is here that Chitragupta sits and maintains the account good and bad deeds of human beings. The temple is also adapted from the construction of the Chola dynasty which makes it rich in heritage and culture.

In addition to this, there are countless more beautiful temples that make Kanchipuram the temple city of India.

The best time to visit Kanchipuram temples is October to March, because other than these months, Kanchipuram experiences extreme weather. It is extremely humid during summers, which make it difficult for people to travel. While monsoons deal with heavy rainfalls. This rainfall makes it a bit pointless to travel, because although the scenic beauty touches heights, yet most of the areas remain closed. Hereby, winters are said to be the best time in South India for its bearable weather.

Other than these festivals, Temple Car Festivals, Pavithrothsavam, Sankara Jayanti etc. are celebrated to make the city full of festivities the whole year.

How to Reach Kanchipuram Temple?

Kanchipuram can be reached from Chennai with the roads by covering a distance of 75 km. The bus service is easily available.

The Chennai International Airport is the closest to reach Kanchipuram district. This is just a drive of 2 hours away from the temple.

Q. 1: What are Kanchipuram Temples famous for?
Ans: Kanchipuram is known as the temple city for countless mandirs residing in the city. Out of 108 holy temples of Lord Vishnu, 15 are present in Kanchipuram which attracts countless tourists.