The Mahabodhi Temple Complex is one of the four most prominent and sacred sites related to the life of the Lord Buddha, It is this place, where Prince Siddhartha Gautam attained ‘bodh’ (Enlightenment or spiritual knowledge) and became ‘Buddha’, which means ‘the awakened one’ or ‘the enlightened one’.

The Mahabodhi Temple Complex is located in Bodh Gaya, about 16 km from District headquarters at Gaya, on the banks of the Niranjana River. This temple complex is also known as Mahabodhi Mahavihar, which literally means “the great awakening temple”. It is a UNESCO World Heritage site.

The history of the Mahabodhi Temple at Bodh Gaya:

The first temple was built by Emperor Ashoka in the 3rd century B.C. So, while King Ashoka is credited as the founder of Mahabodhi Temple, the original structure was replaced later. This temple is revered as the cradle of Buddhism in the history of mankind. Exceptional records of the events that give an insight into Lord Buddha’s life and teachings are present in the temple complex. Many Buddhist and Hindu devotees visit the temple in large numbers. Many Hindus believe that Lord Vishnu was reincarnated as Lord Buddha. 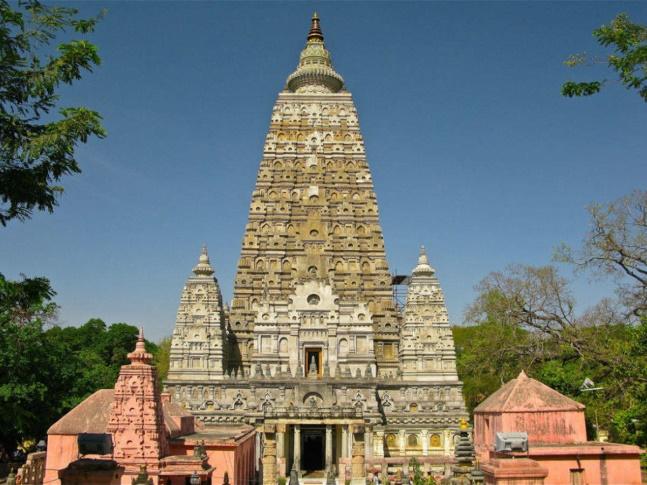 Buddha means enlightened one. As per the historical facts, around 589 BC, he was born as ‘Siddharth Gautam’ into a royal family belonging to the ‘Shkaya’ dynasty. His father, Sudhodhana, was the king of the Sakya clan. Siddharth was born in Lumbini, near Kapilvastu in Nepal. At the time of his birth, astrologers predicted that the prince would either be a great king or would renounce everything and become a Buddha. The king was advised to keep Gautam away from the sight of old age, diseases, death, and ascetic people.

His father, determined, to make his son a great king, confined Siddhartha into the palace and surrounded him with all worldly pleasures and luxury, and thereby hiding the realities of life that might encourage him to renounce the world and become Buddha.

But as fate had pre-decided, one-day while on a visit to his city, he saw all these things and was deeply moved at the four sights. He wanted to know the reasons for man’s sufferings and a way to end it. So, at the age of 29 years, he left his wife, his son, and the entire kingdom and left for the forest to find answers to his queries.

He travelled on foot for long and reached the forested banks of the river Phalgu, near the city Gaya. There, he sat and meditated under a Bodhi tree (also called Bo tree). It is believed that after meditating continuously for 3 days and 3 nights, he not only attained enlightenment but also got answers to his questions.

He expounded his teachings which ultimately formed the basis for religion, Buddhism. Post his awakening, Buddha spent subsequent seven weeks in the vicinity, at seven different spots, meditating and pondering over his experience. The current Mahabodhi temple has those specific places related to the seven weeks spent by Lord Buddha at the location:

Emperor Ashoka of the Mauryan Empire is considered to be the founder of the Mahabodhi temple. He visited Gaya approximately 200 years after Buddha attained Enlightenment, in order to establish a monastery and shrine on the holy site. While they have disappeared today, the Diamond throne or ‘Vajrasana’ that he established, between 250 and 233 BCE, at the foot of the Bodhi tree to mark the location where Buddha attained enlightenment is still present. This Diamond throne is the centre of many festivities and is worshipped even today.

This throne was once encircled by a sandstone balustrade but currently, only a few of the original pillars are still standing. Carvings of sculpted human faces, animals and decorative details cover these pillars. Emperor built the original gateway to the Temple that is on the central path. However, this was later rebuilt. As we move further towards the main temple, there is a building that houses several statues of Buddha and Bodhisattvas. To mark the declaration of Buddhism to be the official religion of the state, Emperor Asoka built a small shrine with a standing Buddha in the back and with his footprints (Padas) carved on black stone. This shrine dates back to the 3rd century BC and is further up the central path as one goes towards the main temple to the south. He installed thousands of such footprint stones all over his kingdom.

The temple’s current pyramidal structure goes back to the times of the Gupta Empire, around the 5th–6th century. One of the oldest brick structures, the Mahabodhi Temple, was highly influential in the development of later architectural traditions.

The classical style of Indian Temple architecture inspires the Main Temple. While the temple faces east, its entrance is from the east as well as from the north. The honeysuckle and geese design decorate the mouldings of the low basement.  Above this is a series of niches containing images of the Buddha. The height of the Mahabodhi Temple’s central tower is 55 metres (180 feet).

Several layers of niches, arch motifs and fine engravings are present in this pyramidal tower. Four smaller identical towers topped with an umbrella-like dome, adorn the four corners of the two-story structure. Four statues of Buddha in a small shrine are present in four corners under these four small towers. Inside the temple sanctum, encased in a glass, is a yellow sandstone (gilded) statue of the seated Buddha (over 5ft high) holding earth as a witness to his achieved Enlightenment. There is the main hall above the sanctum, which has a shrine with a statue of Buddha. Senior monks gather here to meditate.

Two distinct types of high stone railings surround the Mahabodhi Temple.  These railings are built in different styles and with different material. The older one dates back to about 150 BCE and is made of sandstone. It carries the scenes of elephants bathing Maan Lakshmi, the goddess of wealth; the Sun God, Surya, on a four horse-driven chariot. The newer railing, believed to be of the Gupta period, is made from unpolished coarse granite. It has figures of stupas, garudas and images of the lotus flower.

How to reach Mahabodhi Temple at Bodh Gaya?

To maintain peace on the temple premises, Electronic devices and mobile phones are not allowed inside. One has to leave these devices at the baggage counter located at the entrance.

There is a minimal fee entrance to Meditation Park. It remains open from sunrise to sunset.

Q. 1: Is the current Bodhi tree same under which Gautam attained ‘bodh’?
Ans: No. The original Bodhi tree was destroyed by Tissarakkha, Ashoka’s queen, as she did not favour Ashoka embracing Buddhism. A second tree grew from the roots of the original tree.

Q. 3: Who built the Mahabodhi Temple?
Ans: The original temple was built by King Ashoka.